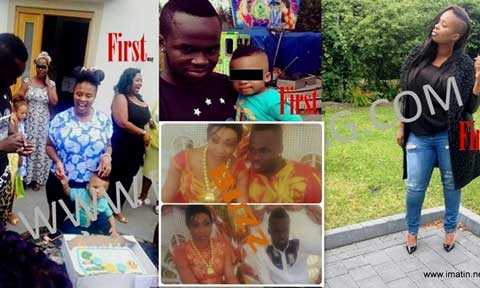 According to a viral report, the trouble in Tiote’s home was ignited when the footballer who is married in the UK to a woman named Madah with two children, traveled to his native Cote’Ivoire and married another wife named Doukrou Laeticia. He also had a child with a mistress named Nkosiphile Mpofu.

An according to sources, these three women plus some more have been battling over Cheick Tiote.

“A married Premier League footballer who already has three children by his wife and mistress has just taken a second bride in his native Cote’Ivoire (pictured with second wife, Doukrou Laeticia ).

Cheick Tiote, 28, who earns £45,000 a week playing for Newcastle United, reportedly wed Laeticia Doukrou in a traditional ceremony earlier this month, saying taking another wife was ‘nothing unusual’ given he is a Muslim.

But news of the second wedding came as a surprise to his first wife, Madah, 25, who is said to have only found out about it on Facebook. Madah, who lives with Tiote and their two children in a £1.5m house in a village outside Newcastle, reportedly fainted with shock when she saw the photographs of her husband marrying another woman.

Meanwhile the midfielder also has a one-year-old child with mistress, 33-year-old Zimbabwean Nkosiphile Mpofu, known as Nikki. (pictured above).

His agent today confirmed reports he had got married for a second time.

Jean Musampa said: ‘I can say that he did get married and that it is his second marriage. This is nothing unusual. He is a Muslim.’

The footballer, who can have four wives under Islamic law, is also said to have insisted to friends that having several partners is commonplace in his native Ivory Coast.

A source told The Sun: ‘He doesn’t see a problem with having two wives. It’s perfectly acceptable in his culture. He doesn’t see he has done anything wrong and doesn’t know what the fuss is all about.’

But his first wife, Madah, is said to have felt rather differently.

According to Ivorian news website iMatin, Madah wasn’t aware of her husband taking a second wife, and found out about it through social media.

They reported that she fainted when she saw the photos of her husband marrying another woman – whose name she did not know – on Facebook.

The first Mrs Tiote (pictured above with the footballer) is now said to have forgiven her husband, but his 33-year-old Zimbabwean mistress, Ms Mpofu, is believed to have recently ended her three-year affair with the footballer after he allegedly promised to make her his wife.

While she was said to have been ‘comfortable’ with his being married, she apparently decided to call the relationship off because he ‘used me like a mop’.

Ms Mpofu was pictured earlier this week leaving a Waitrose store in the village where Tiote lives with his family, with her son by the footballer, Rafael.

Tiote received interest from Lokomotiv Moscow during the summer and was thought to be keen on a move to Russia.
He remained on Tyneside after Lokomotiv failed to make an acceptable offer, but his contract is set to expire in 2016.