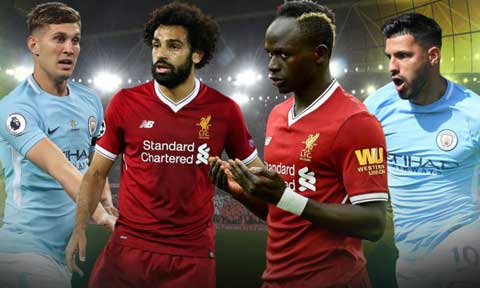 Below is the full match report:

Liverpool players and fans were incredulous. Some neutrals were, too. Jurgen Klopp would later stride directly to referee John Moss after the final whistle in search of an explanation. But others understood. Rarely are opinions as split as they were on Moss’s decision.

There was nothing rare, however, about City’s response to going a man up. Pep Guardiola’s side immediately leapt onto the front foot. Gabriel Jesus had a goal ruled out for offside minutes after play resumed, but there was nothing wrong with his header deep into first-half stoppage time. It put City 2-0 up and into cruise control.

Fernandinho threaded a through-ball straight onto the foot of Sergio Aguero soon after halftime, and Aguero squared to Jesus to make it three. Klopp, who introduced Alex Oxlade-Chamberlain at halftime for his Reds debut, stood helpless on the touchline.

Competing 10-v-11 is difficult enough in a vacuum. Against a City side with so much technical ability all over the pitch, it’s darn near impossible. And at 3-0 down? Liverpool’s attempts to climb back into the game were rendered futile by Jesus’ second goal.

But City’s performance with a man advantage was a far cry from how the hosts approached the game at even strength. The opening 20 minutes were oddly conservative and controlled, given the participants.

Klopp entered the day with an impressive record against Guardiola, and took four points from two games against Guardiola’s City last season. But he largely reigned in his trademark press early on out of respect for City’s attacking prowess.

Liverpool sat as deep as it ever has under Klopp, and played on the counter.

It had success on the counter, too. Nicolas Otamendi endured a shocking opening 20 minutes. A clumsy, mistimed tackle earned him a yellow card less than six minutes in.

A second mistake sent Guardiola doubling over in frustration, his head in his hands. A third went unpunished by Mo Salah, whose outside-of-the-foot cross was poor after he skipped by Otamendi on the wing.

But the Argentinean defender, playing on the left of a back three, wasn’t out of the woods. Liverpool exploited space down the attacking right, and Ederson had to get down quickly to his right to deny Salah after the Egyptian winger was played in.

After 23 minutes, though, De Bruyne unlocked Liverpool’s defense out of nowhere:

Play remained balanced with City up a goal. But the game swung when the home side went up a man too. Mane ran onto a Joel Matip ball over the top, and arrived at it around the same time Ederson did.

The City keeper, several yards outside his penalty area, reached it first with his head, and a split second later caught a Mane boot to the face. Moss reached for his red with little hesitation.

The decision initially seemed incredibly harsh on Mane, whose sole intent was to nick the ball around the City keeper. But his foot was high, and his studs struck Ederson flush in the cheek.

At some point, intent is irrelevant. The recklessness and danger of Mane’s challenge were beyond that point. Moss was spot-on.

Mane’s challenge also knocked Ederson out of the match. He lay prone on the Etihad grass for around nine minutes, and was eventually stretchered off with an oxygen mask over his face. He was later taken to a local hospital for precautionary reasons.

Claudio Bravo was largely untroubled after replacing City’s new No. 1.

As if to flaunt his riches, Guardiola introduced Leroy Sane for Jesus after halftime. Sane and Benjamin Mendy combined for a fourth City goal. Sane scored from long range late on to make it five.

City went top with the win. But Liverpool, which suffered its first loss of the young campaign, will look back on the send-off as the moment its afternoon went terribly wrong.