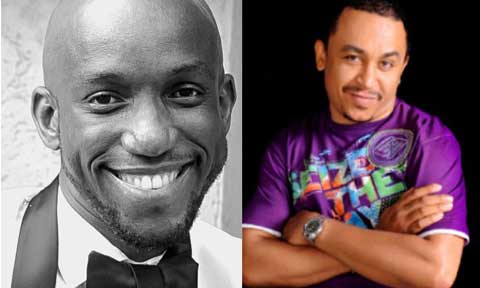 Freeze who has been on a campaign for Christians to stop paying Tithe, had initially written to Obiwon after the singer shared a comment on social media earlier today supporting Tithing. See their posts below.. 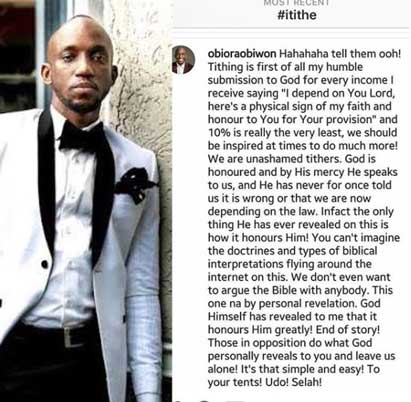 Dear Obiwon,
Tithing was never a part of Christianity, if it were we would have had examples of believers who were, Greek, Gentile, Arab, Roman or Corinthian paying tithes or being admonished to pay. Tithing was also NOT a part of the first Churches the disciples set up, it was an addition to Christianity and is being propagated with much maliciousness. In a recession pastors are getting richer while some people are being sold into slavery and the MUST stop. I'll appeal to you not to promote tithing until this question is answered, so you don't end up edifying the idolatry going on in many churches today. Where did Jesus, our new high priest under Melchizedek, The pillar upon which the Christian faith leans and the foundation of our belief system collected tithes from his congregation, or where our first pastors and GOs the disciples, collected tithe? WHERE??? As a matter of fact Jesus only spoke about tithe twice in the entire bible and in both instances, he condemned people. One clear example of such is in Matthew23:23 where he rebuked the Pharisees for their hypocrisy. He said they remembered to tithe from their fruit gardens but neglected the weightier matters of the law, justice and mercy. Although Jesus said yes they should tithe, lets remember that the Pharisees and scribes were teachers of the religious law and that religion wasn't Christianity, it was Judaism, a religion that makes up 79% of the population in Israel today, as against the 2% of Christians that live there. Furthermore, the Pharisees didn't believe that Christ was the messiah, hence the frequent temptation.

Freeze my brother, I love you and appreciate the times you supported my music. Here's my reply to your advice to me. .

We can quote scriptures back on forth on this tithe matter and I have quoted many myself, but such strivings would be fruitless, and we would be sinning in the light of 2nd Timothy 2:23, no matter which side you're on. .

One thing I believe and you must know about Jehovah God, the Father of my Lord and Saviour Jesus Christ, is that neither you nor I nor any human being for that matter can fight for Him. He is big enough and powerful enough to fight for Himself. My little experience with Him is that you allow God to prove Himself by Himself, in the course of time.

Jesus is jealous for His Church you know, so the matter of who's right or wrong, who's cheating and deceiving in the whole rouse of tithing in churches, will surely be settled; and it will be clear for all to see who's side God is on. I believe we will see it sooner or later, in our lifetime.

So my own advice is, allow God to fight for Himself and prove Himself with His mighty acts. Of course He is looking intently and watching right now how we all are carrying on with this, especially in the light of the greatest commandment which He gave us, which is Love. .

I hope you get to share this too with your followers, so that they also will take heed and not err constantly with insults, dishonourable words and actions against individuals and against the body of Christ, which do not please God. .

For me I consciously chose to leave everything and follow Christ, so I'm glad to bear His marks in my life and ministry (Galatians 6:17). The life and walk in Him is too sweet and precious to give up for anything else in the world!

I wish you a merry Christmas and a Happy New Year.