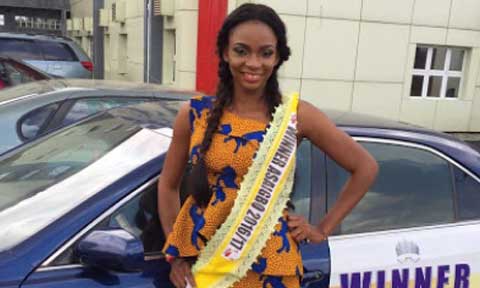 Police investigations revealed that Ugwu Joy had been an alleged serial scammer, duping innocent Nigerians through a visa racket and ponzi scheme.

She landed in police net after series of complaints from some of her alleged victims.

As a beauty queen of a pageant involving the core five Southeast states, Ugwu was seen as a symbol of the Igbo nation before her arrest, and was expected to model the defining character of the people- enterprise, industry and moral character.

And indeed, a little into her tenure, Ugwu Joy, the reigning Miss Asaigbo 2016, showed signs she meant business to live up to the billing.

SunNewsonline reports that the Enugu State University of Science and Technology (ESUT) Accounting student, who has been a lone wolf fending for herself since she lost her parents as a child, set up a foundation to care for the vulnerable and needy kids.

Speaking during an earlier interview, Joy Ogwu, the last in the family of three and native of Eha-Amufu in Isi-uzo Local Government area of Enugu State, said:

“I had lots of things that motivated me to go for the Miss Asaigbo pageant. First, to me, pageants are fun, sparkles, glitter and shine, also to gain more self confidence, make new friends and enjoy the prestige of wearing the crown in my community.

But most importantly, my motivation comes from using the platform to gain more awareness for my foundation, Feed the Poor and Orphan Initiative. Knowing firsthand how it feels growing up without parents, the passion for that kept me motivated and strong throughout the competition.

“My role model was my mum, though I was three-years-old when she passed on. The little memory and the stories I heard of her still make me smile when I remember them. She was a strong woman and made sure we didn’t go hungry kid, or stop schooling when my dad died, she’s and will always be my role model.

“Many pageant winners are focused on the girl child programmes already, my main focus now is not just the girl child, but every homeless, helpless and hungry kid on the street. They need to be shown love and I hope to be the gap between them and the rich that want to help, but don’t know how to go about it.”
As part of her humanitarian service, Joy recently visited the Enugu prisons where she celebrated her birthday, lavishing goodies on the inmates. According to her, she had decided to do more in her campaign to prevent youths from taking to crime.

“On my birthday, I visited the prisons with the goodies I got for them. Then, the warden officer gave me a tour and while he was at it, two boys were brought in and everyone started laughing and I asked why?

He explained that the boys were released just two days before, but were back, because all their friends and the love they could get was in the prison yard, as they had no one to show them love in the outside world when they were released.

So, they had to commit another crime in order to be brought back into prison. When I heard that, I froze. Imagine what love could prevent in our society? Crimes and hate will be reduced drastically if together we can make the world a better place,” Joy reasoned. 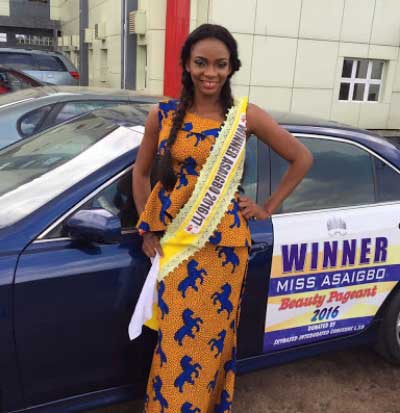 “The story of my life is enough inspiration to all who are looking up to me, I lost my parents at age three, I didn’t blame God or blame anyone… I folded my sleeves, worked very hard to get educated and prayed to God without ceasing. If I could be something today, anyone can be whoever they want to be… only God and yourself can.”

However, the beauty queen seemed not to have been true to her words, as she is herself today behind bars. suggesting that her touted integrity, diligence and selfless service have all been a facade.

Saturday Sun reports that the embattled pageant winner had allegedly fleeced many ‘clients’, who, however, lacked the nerve to report her because they were either threatened or afraid of her touted status and influence, until one Jonathan Nwaogu and Anita Oby reported her in Lagos and investigation was launched into the complaints.

Joy had allegedly failed to fulfill a contract to help Jonathan secure a visa for which he reportedly paid million naira (N1m). She was said to have started evading her client and avoiding his calls after the payment.

Joy also allegedly duped Oby N2 Million through a ponzi scheme called “Me and You” purportedly floated by the former. All went sour when one of the subscribers refused to pay and the organisation could not refund Oby’s money.

“The girl duped me one million naira and the evidence is there. I didn’t have much to say, because she said she wanted the matter to be taken to court.

What baffled me was the way she took the matter. It was quite obvious that she defrauded me. All she needed to do was to surrender and settle for peace to reign. I don’t understand why she decided to go to court; I heard the comments she made in the police station.

The money is just one million naira and she behaved as if it was dollars. All I planned was to recover my money in a very simple way.”

Saturday Sun learnt that when she was first arrested in Enugu, the accused allegedly slapped a police officer, bragging about her connections.

She was also said to have had N7.5m in her account then, but allegedly made massive withdrawals between the period she was temporarily released and rearrested, leaving only N400,000 balance.

Although the accused who also works with a company named FESTIVITY CAKES AND CRAFTS, was granted bail, she was still in custody as at press time, as she could not meet the bail conditions.

Bethel Chikezie, who claimed to be a relation of Joy, told Saturday Sun:

“The case is not just a thing of today. The allegation was based on MMM. I don’t know if the person who reported her has any personal matter with her. Maybe the person does not like her.

MMM is not a recognised business in Nigeria, even the government warned when all these things came up. The point now is that they wanted her to pay for the thing, but she is saying no, because she did no wrong. Everybody did MMM, her own case could not be different.”