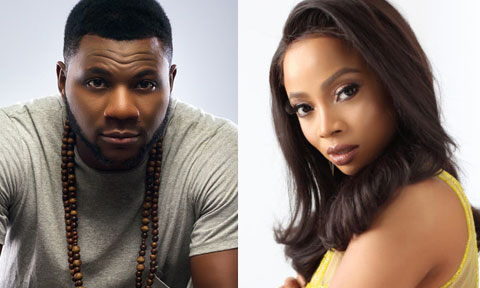 Another man has proposed to her, and that in the most unusual fashion. Uchechukwu Sensei, OAP at City FM, 105.1, actor, musician and events host took to his Instagram to sensationally woo the delectable Toke.

While the jury is out on Toke’s reply, Celeb Police has taken out time to look at five reasons why she may fall for him.

1.The Guy is Bold

Confidence is a prime virtue women desire in their men. A socially active lady like Toke will surely want her man to have this in large doses. Coming out to reach for her the way he did is most likely to strike a chord.

Often referred to as a Burna Boy lookalike, Sensei Uche has a body most ladies will die for. Most ladies love to have the guy every other lady will die for. Bragging rights. Plus, if we are to go with Toke’s preference in her ex-hubby, Maje, then Sensei has a real chance

3. The Guy is Intelligent

Apart from his usually captivating presentation style on air, his beautifully penned Instagram message smacks of the kind of intelligence a high-society lady like Toke will demand.

4. The Guy Shows a Deep Understanding of Her Person

The details of his message say as much. His proclamation that he has chosen to love her weaknesses is a soft part of her armour that Uche has certainly pierced. And that, deeply. Which woman doesn’t crave such?

Sensei Uche knows what he wants. Earlier in the year, precisely on the occasion of his birthday, he declared his ready to fall completely in love in 2016. Now, with his right type of woman in sight, he has drawn and released his Cupid arrow.

Check out the sensational message he is striking Toke Makinwa’s heart with:

“Being a woman, whatever society she finds herself in, is hard. It’s not bad enough she has to deal with that time of the month every month or scream to the edge of death while bearing a child, she has to deal with cat calls (if she’s a hottie) or snide remarks (if otherwise).

And these difficulties are prevalent in Nigeria, especially in the media or entertainment industry.

Buy or build a plush house in a choice area and you’re called a prostitute who was done a favour by one big businessman or top government official. Put your life story in a book and sell, they will say you only did so just to make money.

You are almost never given a chance to air your views or live and enjoy your life without someone having something negative to say about you.

As I contemplated on writing this, I looked at all the qualities that I personally like in a woman: ambitious, intelligent, adventurous, focused, independent minded, beautiful, respectful; these are just a few. And I see all these traits in Toke Makinwa, who has been constantly vilified by people.

Despite being through so much adversity she has always found a way to turn it around for good, and that tenacity of her will is what many people do not see and appreciate. Even those who are close to her sometimes criticize her for being who she is: an ambitious woman with a strong drive to write her name in the sands of time.

However, no matter how much she has been hurt, Toke has always found a way to forgive and let go. That is another remarkable trait. A woman, no matter how successful, needs to be loved and cared for. And no matter her shortcomings, needs to be loved and cared for too. We all have flaws, but learning to love a person in spite of their flaws is a quality of those who truly love others, and it helps to fan the embers of any relationship.

Therefore, I have chosen to love the imperfections of a successful woman like Toke Makinwa, because she possesses qualities any reasonable man desires.

So Toke (@tokemakinwa) will you marry me? ☺

Will he strike his target? Will Toke, in the words of Keri Hilson, get ‘knocked down’. Celeb Police thinks it’s doable.