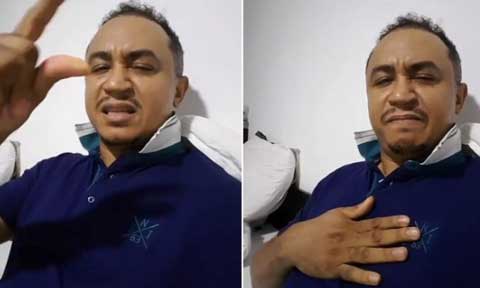 Ifedayo Olarinde, better known as Daddy Freeze, has revealed scary news concerning a curse on his life.
In an Instagram video, the On-Air Personality announced that he has been given 24 months to live because of his tendency to call out pastors especially over tithing.

He said, “It was brought to my attention today that a pastor whose church I attended for more than eleven years, a man who was entrusted with teaching me the Word, cursed me. He said he gives me 24 months to see my end. I reject it.

“Why? Coz I dared ask him to show us where in the Bible the disciples who are our first pastors and Daddy G.Os collected tithe.

“This was a man unto whom I entrusted my tithe for eleven years, my offering. I contributed to the building of his current temple and then he curses me. I reject it and I forgive him and I hand him over to my God who sent me on this mission. God bless you.”

The OAP may not have not mentioned a name but this did not stop people from speculating in the comment section.

One comment reads, “Adefarasin means hidden crown in English. For cursing @daddyfreeze over tithe, his crown of glory has gone into oblivion. Lovers of mammon asiri tin tu!”

Another says, “@daddyfreeze my brother, you know I was a member of that assembly too for over a decade and it’s just a shame how these Pastorpreneurs have turned God to be an object of use and he thinks like them ..why 24 months though? To organize his crime against you? @pauladefarasin stoop so low on this one but onto what? TITHE, MONEY, MAMMON? Is that the essence of our common faith???What a low down dirty shame!!”

While these people speculate who this pastor could be, others simply showed their support for the OAP with the hashtag, #istandwithdaddyfreeze.

Daddy Freeze has been very vocal about his contempt for pastors who live off their congregation, hence the #freethesheeplemovement.

This contempt has led to him tackling many ministers including the likes of Bishop David Oyedepo, Pastor Enoch Adeboye, Pastor Chris Oyakhilome, Apostle Johnson Suleman, and recently Paul Adefarasin.

The OAP has clearly shown that he is not afraid to call out religious leaders. No one knows if this curse will stop him from being so vocal about his concerns with Nigerian pastors.

Who do you think this unknown pastor is?