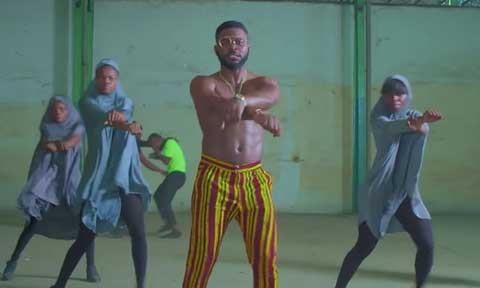 The video came out about a fortnight ago and had been lauded as a great song that talked about societal ills that people seemed to be too scared to talk about.

But it hasn’t been all rosy as there have been criticisms, especially for the use of some Muslim girls in Hijab doing the ‘Shaku Shaku’ dance which some people have found offensive.

MURIC in a statement signed by their director Professor Ishaq Akintola, said that the video is offensive and that it was giving a grace of 7 days for its removal before Legal Action is taken against him.

Folarin Falana (Falz the Bahd Guy), a Nigerian artist, last week released a new song called ‘This is Nigeria’. The production featured a character that dressed like a Fulani man, who suddenly abandoned his traditional guitar and beheaded a man. It also portrayed women in hijab as choreographers dancing the ‘shaku-shaku’ (a dance associated with a drug-related song).

The Muslim Rights Concern (MURIC) strongly denounces the Shaku Shaku dance video. It is thoughtless, insensitive and highly provocative. It is a hate video. It is Islamophobia nulli secundus. This video has the potential of causing religious crisi of unprecedented dimension. We therefore demand its withdrawal and an apology to Nigerian Muslims within seven days or the authors and their agents will face legal action if they fail to comply.

The video manifests ethnic bias against Fulanis while it ignored the criminal activities of ethnic militia of the Middle Belt who have also massacred Fulanis and rustled their cattles in their thousands. This video has denigrated Islam, demonized Nigerian Muslims and subjected them to public opprobium.

MURIC rejects Falz’ explanation that the the girls in hijab in his ‘Shaku Shaku’ dance symbolize the Chibok girls because nothing in the video indicates that the girls represent the Chibok girls. At least none of the Chibok girls have been seen dancing like a drunkard. They are always in pensive mood. Do they have any cause to be dancing? Are they happy? This video is the most detestable, odious and insidious Islam-bashing in recent time.

Only the scenes portraying police brutality and the money-swallowing snake in the video are near the truth. Falz’ ‘Shaku Shaku’ video is nothing but a hate-induced production. It is a most unpatriotic handiwork of a Nigerian youth in 2018. Here is the work of a youth working towards turning Nigerians against each other; a youth inciting Nigerian Christians to hate their Muslim neighbours; a youth instigating Muslims to religious violence. This video is in bad taste. It is a hate video. It is an assault on the self-dignity of every Muslim. It is freedom of expression gone haywire.

We call the attention of security agencies to this hate action. The tragedy facing modern societies all over the world is their criminal complicity in Islam-bashing and their hypocritical accusation of Muslims of terrorism and religious violence. On the contrary, terrorism is mere smoke. Provocation, derision and injustice are the fires which cause terrorism. We reiterate our pontification that it is naïve for a fire fighter to ignore the fire and turn his hose at the smoke. The world is treating symptoms, leaving the real ailment to fester.

We remind Nigerians of the outcome of similar provocative actions in the past and their unpalatable outcomes. The violent reaction of Nigerian Muslims to Fun Times magazine’s blasphemous story of December 1990 in which it was alleged that “Muhammad had an illicit affair with a woman of easy virtue according to the Qur’an and later married her” shook the country to its foundation. Isioma Daniel’s article, “The World at Their Feet” published in ThisDay newspaper on Saturday, 16th November, 2002, drew the ire of Muslims across the length and breadth of Nigeria.

Violent demonstrations broke out in 2005 when the Danish newspaper Jyllands-Posten’s published a cartoon in which Prophet Muhammad (peace be upon him) was depicted as a terrorist wearing a bomb-laden turban. In January 2015, Charlie Ebdo, the French satirical magazine used cartoons that were considered provocative by Muslims. Blood flowed on the streets of Paris.

But has this advice been taken seriously? Nigerian Artistes have consistently proved that they are most willing to ignore the Pope’s advice. They provoke Muslims at the slightest opportunity. They have this habit of giving Muslim names to characters who play devilish, immoral and lowly roles in their films, e.g. Sikiratu Sindodo, Jelili Oniso, Basira Baseje, Osanle Modinat, Aminatu Pa-pa-pa are a few examples. Of recent, Muniru and Ambali play despicable roles of idiocy.

The idea behind this is to make Muslims feel ashamed of the ordinary Muslim name. It is inhuman, despicable and bully-motivated. MURIC will defend the Muslim name with every legitimate tool at its disposal.

There is no gainsaying the fact that a culture of impunity pervades the arts in Nigeria. The National Film And Video Censors Board (NFVCB), a regulatory agency set up by Act No. 85 of 1993 to regulate films and the video industry has a case to answer. ‘Shaku Shaku’ video was shot and released under its watch. What is its alucutus. What will it say if Muslims elect to go violent over this primitive, irresponsible and reckless production? What will it say if hundreds of lives and properties worth billions of dollars are lost in the ensuing violence due to its negligence?

As we round up, MURIC warns Nigerian artists to stop giving Muslim names to devilish and lowly characters. We appeal to Muslims all over the country to simmer down. Let us adopt a civilized approach to ‘Shaku Shaku’ and teach agents provocateur some lessons in respect for human feelings. Instead of going violent, Nigerian Muslims should take those behind the ‘Shaku Shaku’ video to court in order to serve as a deterrent to others.

We therefore give notice of impending legal action against the artist behind the ‘Shaku Shaku’ video unless the latter is withdrawn and an apology is widely published within seven days.