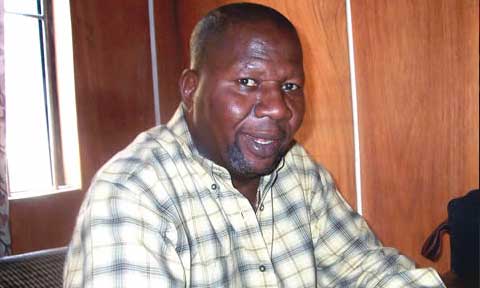 In-laws of Baba Suwe, including the immediate younger sister of the deceased simply identified as Mujidat, were also not happy with Baba Suwe as they threatened to disrupt the burial of Omoladun yesterday. Some of them insisted that she should be buried in Ibadan, home town of the deceased. There was a heated argument over the issue at the burial yesterday in Ikorodu.

The death of Monsurat, according to her daughter, Omolara and some of Baba Suwe’s in-laws, may have been caused by high blood pressure following a protracted quarrel she had with Baba Suwe before her death in the early hours of yesterday. They claimed that she was battling with the disease for a long time before it finally claimed her life. Omoladun’s daughter, while speaking to nigeriafilms.com yesterday at the burial, said having lived with both her late mom and step-father for years, she witnessed many unresolved squabbles between the couple.

She added that on several occasions, her late mom’s family members waded into the matter and at a point even advised her to vacate her matrimonial home. “She definitely died of high blood pressure as a result of the squabbles she had with her hubby,” Omolara said amid tears. Also corroborating her claim, the in-laws, at the burial yesterday, said the deceased’s health condition deteriorated on several occasions in her lifetime, due to complaints about Baba Suwe’s attitude and the quarrels they had.

Speaking to nigeriafilms.com, Mujidat, the deceased’s younger sister said her family had advised the late Omoladun Kenkelewu to vacate her hubby’s home, but she was adamant. “My elder sister was always complaining to me about Baba Suwe and each time I advised her to quit, she would express optimism that all will be well some day. Now, see what has happened to her,” she said, adding that it was obvious Baba Suwe did not kill her with his bare hands, but his failure to give the deceased rest of mind may have compounded her health problem.

At the burial yesterday, there was a mild commotion as some of Baba Suwe’s in-laws threatened to hijack the corpse of Monsurat Omidina and take it for burial in Ibadan, the Oyo State Capital and home town. Although their plan was nipped in the bud by some sympathisers and Baba Suwe’s family members who made it clear that since she had two kids, Okiki and Alima for her hubby, Omoladun must be buried by Baba Suwe.

The in-laws, after their aborted plan to hijack Moladun’s corpse, also stirred another controversy when they insisted that the water used in bathing the dead and the clothes she wore last must be buried with her. Suspecting it had spiritual undertone, the officiating Imams advised that they should be buried elsewhere. Reacting to his in-laws claim, Baba Suwe who was still shocked by his wife’s death, said their allegations were baseless.

“No, I did not. How could I have killed my wife? We had no disagreement. On Monday night, we still played, made phone calls and ate together. She cooked the food we ate the previous night and I was billed to take her to the UK passport office early this morning (yesterday morning) before the incident occurred. “She was hale and hearty before we slept on Monday night.

There were no symptoms of illness, no premonition of death,” he said sobbing. Meanwhile, tears flowed uncontrollably yesterday at the burial of the late Omoladun Kenkelewu as movie stars in their scores wept profusely.