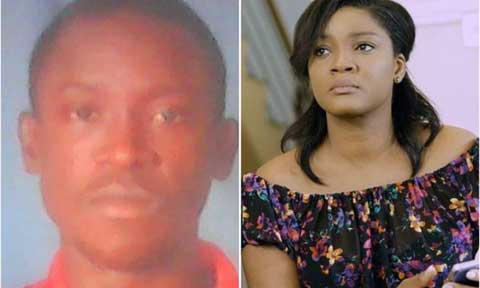 Great is Godwin’s anger, that he is wishing Omotola death in these words “Omotola Jalade Ekehinde, your death must come heavily this year by an accident”.

The infatuated fans say he is wishing the screen goddess death because he in boxed Omotola to divorce her husband and Marry him but rather than granting him his request the star actress and singer blocked him instead even after he had promised Omosexy that he will worship her and even wash her under wears.

The angry lover wannabe vent his anger further by calling her shameless and an Idiot .

We however hope that this death wish is not treated with kid gloves because many a international celebrity have been hurt by obsessed fans, bellow is a list of famous stars who have been victims of some seriously creepy stalkers! This is one part of stardom that would make most people nervous — and rightly so ! 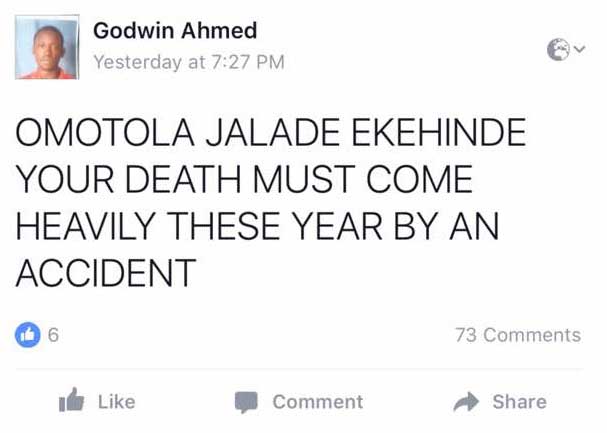 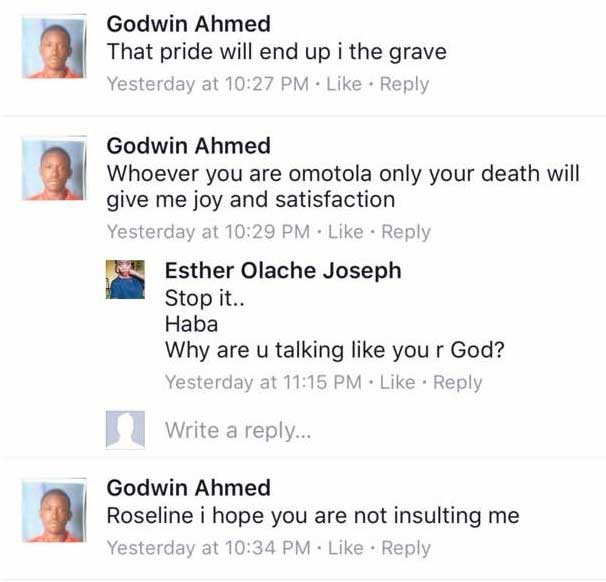 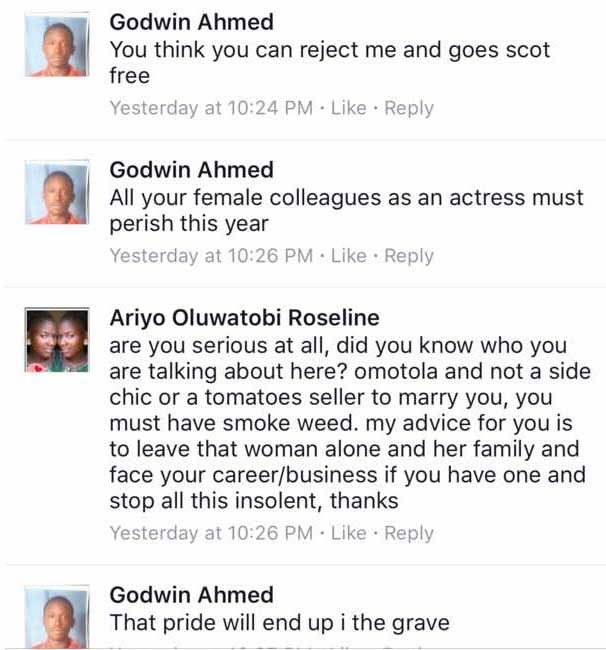 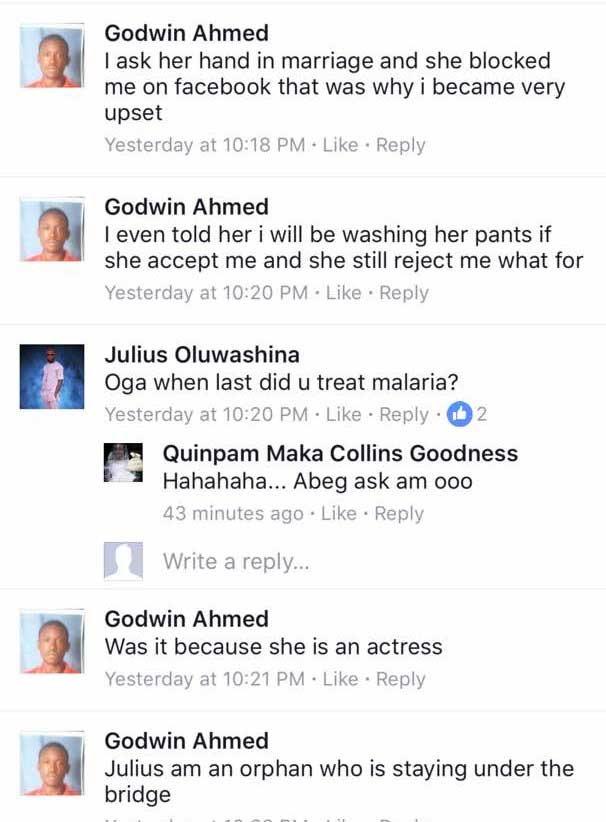 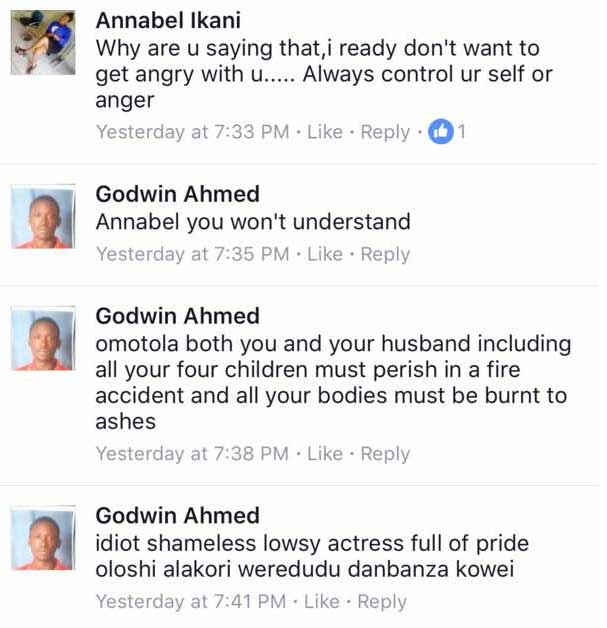 Celebrities Who Have Suffered Stalking

The guy stalking Lana Del Rey in 2015 swore that his obsession started after he took hallucinogens.

Construction workers found Zachary Self lying on a mat in the garage of Lana’s Malibu home.

The then 19-year-old made a run for it but was soon apprehended by police after finding numerous obsessed love notes to the singer as well as a court citation that happened in Kansas.

READ ALSO: How Davido left Wizkid drunk with a bill of N500,000 at a bar on the Island

Self, whose family claimed that he was bipolar, pleaded no contest to stalking. He spent 84 days in jail, was on probation for five years and had to be put into a residential program. Finally, he has to stay away from her for the next decade.

Beyonce stalker Bassey Essien convinced himself that the real Bey had been killed by an impostor Beyonce who was living the pop star’s life. Ooookay…
Essien sent Bey threatening letters back in 2009, probably claiming to out her as a fraud. When the diva performed in London at the Sound of Change concert, Bey’s security detail was briefed on this guy to make sure he was no where near the singer.

The story of Britney Spears and Masahiko Shizawa, the man who was stalking her in 2002, is definitely a weird one.

It all started when the Japan native, who was said to be madly in love with Brit, began sending Spears love letters, e-mails and pictures of himself along with messages like “I’m chasing you.” A restraining order was issued, but Shizawa still stalked Brit outside two of her houses as well as her parents’ home, trying to gain entry wherever he could.

Then, in an odd turn of events, Shizawa ended up trying to sue Spears after a confrontation ensued with her bodyguards outside of her house.

He claimed he suffered “extreme emotional stress” after one of Brit’s protectors pointed a gun at the man. However, the case was quickly dismissed.

“I am friends with Miley Cyrus….She’s my wife. Me and Miley have been friends for five years,” is reportedly what Miley Cyrus’ stalker, Jason Luis Rivera, told police when he was caught trying to get into the ‘We Can’t Stop’ pop star’s house with a pair of scissors.

Cyrus got a permanent restraining order on this guy before Rivera was convicted of misdemeanor trespassing and sentenced to 18 months in jail.

The woman who was stalking Justin Timberlake back in 2009 is seriously cuckoo.

Karen McNeil, pictured above, showed up at Timberlake’s house in November of ’09 claiming that she was God, and that she and the ‘SexyBack’ crooner were destined to rule together.

She also said that “Babylon witches” were after her and she feared they were going to cast an evil spell on her. Of course, authorities promptly took her to a psychiatric facility.

This was not the first time McNeil showed up to JT’s L.A. home either. Timberlake said she had gotten through the gates before, and that she claimed to know him.

Prior to stalking the ‘Suit & Tie’ singer, McNeil was obsessed with Guns N’ Roses frontman, Axl Rose, and was arrested several times outside of his home.

Creep alert. Selena Gomez had one giant scare in early 2012, when a man by the name of Thomas Brodnicki claimed he had “over fifty conversations with God a day, about killing Ms. Gomez.”

In an even stranger turn of events, Brodnicki himself urged Gomez to file a restraining order.

In a statement, he said, “I believe that a restraining order should be issued against me to prevent me from trying to contact Selena Gomez.

I do not wish to object to the restraining order against me because I know it is the only thing that will make me stay away from Selena.”

Um, WHAT?
Gomez heeded her stalker’s warning, and was granted a a three-year restraining order against Brodnicki in Jan. 2012.

In 2012, Madonna was in fear for her life for the second time, as the man who was convicted of stalking her in the ’90s escaped the mental institution where he was committed.

Robert Dewey Hoskins was deemed a huge threat and was first sentenced to 10 years in prison for stalking Madge in 1996.

He had been obsessed with the Material Girl for years, and her bodyguards were forced to shoot him when he hopped the fence at her Hollywood Hills home.

Hoskins was a violent man and had said he was either going to marry Madonna or “slash her throat from ear to ear.”

Hoskins served his time and was later transferred to a psychiatric hospital after another arrest, but he escaped from the facility in early 2012.

He was apprehended by police in February, and taken back to the Metropolitan State Hospital in Norwalk, Calif.

Paula Abdul‘s stalker story is one of the more traumatizing on this list. A former ‘American Idol’ contestant, Paula Goodspeed, was absolutely obsessed with the ‘Straight Up’ singer, and even auditioned for the show to no avail.

However, what seemed like fanatical yet pretty harmless behavior — for example, her car was totally decked out with everything Paula, from her “ABL LV” license plate to the pic of Paula on her rearview — was obviously much more. One day in Nov.

2008, Goodspeed was found dead in her car outside of Paula’s home due to an overdose on prescription drugs. The death was ruled a suicide.

In a statement, the singer/choreographer said, “I am deeply shocked and saddened at what transpired yesterday. My heart and prayers go out to her family.”

Justin Bieber has a lot of fans, but a few of them took their love for the ‘All Around the World’ pop star a little too far.

Dana Martin was doing a life bid in a New Mexico prison for the brutal rape and murder of a 15-year-old girl. He contracted his prison buddy, Mark Staake, and Staake’s nephew, Tanner Ruane, to have them find Bieber and castrate him with garden shears so he could have his, uh, “parts” as a souvenir.

Martin admitted he was attracted to Justin saying, “He’s a good-looking kid. Would I go to bed with him? Yeah. He’s legal, so probably.”

Martin’s hit men (Staake and Ruane, pictured above) were arrested after police found out about their vicious plot, which was definitely a good thing for Bieber…

Joss Stone had some seriously scary stalkers back in 2011. Two men were accused of plotting to rob and kill the songstress.

Their plan was to decapitate the singer, dump her body in a river and apparently make off with some cash and other loot in the process.

Bradshaw and Liverpool were found at Stone’s home in possession of a samurai sword, hammers, knives and a body bag.

Liverpool was sentenced to 18 years in prison for the murder plot, but Bradshaw’s sentencing was delayed pending a psychiatric evaluation. We’re just glad Joss Stone made it out okay!

Yolanda Saldivar ran Selena’s fan club as well as a clothing boutique for the singer, but people quickly began to notice that she obsessed over the songstress.

She had what would be considered a shrine to the singer in her home, complete with posters, candles and videos.

Finally, after Saldivar began embezzling money from Selena’s fan club, the ‘Dreaming of You’ singer cut ties with her, and that’s when things got really ugly.

Selena met with Saldivar to retrieve essential tax documents on March 31, 1995, and this is when the former employee shot and killed Selena.

Saldivar was found guilty of murder and sentenced to life in prison. She is eligible for parole in 2025.