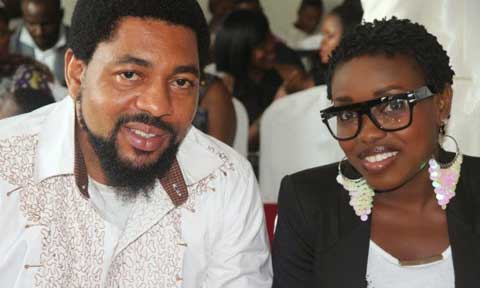 Three years ago, on June 12, 2014, the Nigerian music space was struck dumb by the death of award winning gospel singer, Branama Queen, Kefee, a while after she tied the knot to popular OAP, Teddy Don Momoh aka Teddy The Fresh Prince.

Entertainer caught up with Don Momoh at the maiden edition of CityPeople Music Awards and he opened up on life after Kefee and why he is now a singer among other issues.

We know you as an OAP but I watched you perform and I was like wow! What is happening?

I am grateful to God and CityPeople for this opportunity. I am excited! It is the dream of every artiste to make music and see the reaction of people and like you said, it was good!

Are you working on an album and can you tell us about it?

Yes, I am recording an album entitled Me & The Next Generation. It is about me doing collabos with those I call the young cats. I am talking about those young talents out there who don’t have the opportunities that I had. Like the song I performed with a young guy today tells the entire story. He is not known but I am known; I am a brand so he is riding on my back to stardom. So, it is all about me and the next generation. I am trying to build bridges for the younger generation.

How do we reconcile this with your being an OAP?

One of the reasons I went into music was because a lot of times people come to me for advice on their sound. I am a versatile artiste and most of the time I am there when some songs are made; I am a contributing factor to some big hits and then, the songs come out dope and they become hits and I am like ‘okay, don’t you think you have something you need to explore?’ There was this movie I watched where this guy died and went to heaven and he was carrying heavy bags and God asked him ‘why did you bring this bags to heaven?’ But he was stammering. And God told him to open the bags and it turned out the bags was full of songs that he should have written and sang while he was alive but he did not because he was scared of what people would say. That struck me profoundly. Ever since I have been thinking about my music but I did not want to do it because I was like people are going to talk. You know stuffs like ‘he is a broadcaster, what is he doing singing?’ But I saw that movie I said to myself ‘Teddy, no matter what happens, people are going to talk. Why don’t you just do you and be happy’ and here we are today.

How are you coping with the stereotyping?

For those who stereotype me I have one question. What does it mean when one is described as multi talented? If I am a broadcaster and a singer, does that not make me multi-talented? And there are lots of people like that. Joe Lo and Uti Nwachukwu to mention a few. So, why would they want to stereotype Teddy as an OAP? Teddy is an artiste, a musician and an OAP; Teddy is multi talented; better get used to it!

How are your friends reacting?

They have been awesome! In fact, they are the ones spurring me on. When these guys are in the studio recording stuff, I share ideas with them. And they are like ‘wow! Bros, you can do this, you should be doing this.’ And when I give it a shot and it comes out with a bang they are like ‘bros, we told you had it in you.’ My friends have been super supporters.

Teddy, you are a handsome guy. For a while you have been a widower. Tell us about the woman in your life?

Oh my God! That is very personal. I don’t want that information going online, on air on paper or whatever; that is my personal life.

But a lot of women out there will be dying for you as a top OAP. Could you tell them something?

What are those qualities you look out for in a woman?

I am someone that wants to fulfil destiny. The Bible says that ‘he that findeth a wife findeth a good thing and obtaineth favour. The implications is that the woman who is your soul mate becomes a help mate so that means that if I was doing certain things that I cannot accomplish, she comes along and we synergise and together we tag along and fulfil destinies. I want a woman that will fulfil destinies with me.

Three years after, are you still missing Kefee?

Oh my God! I am missing her right now. I can imagine what she would do if she was here tonight. It would have be a dream come true because we had planned a lot of things together including a collabo. We were working on an album together. We had two songs entitled Beautiful and Dem Go talk and they are online. She was the greatest thing that happened to cultural gospel music ever! There were times when artistes wanted to sing and it was a no-no to infuse their local languages but kefee was one of those that broke that barrier especially in the church. And then she married that with secular sound and set the tone for a new genre of gospel music. She was a bridge builder. I miss everything about her. She is unpredictable. You can’t imagine what she would do if she was here. There is always that characteristic Kefee touch which is not just there today. There are those special moments that come up again and again and I am like ‘how would she have reacted? How would she have smiled? So many sweet things but God knows best.

How did you take the news of her passing?

Professionally, it did not affect my job because we have been trained to always remember that the listener doesn’t care about what you are facing or going through. You have taken an oath to make people happy so whatever you are going through is your personal business; the show must go on. But personally it has to do with the heart, I was broken. I broke down (Silence, holding back emotions).

…so, where did you find the strength to go on?

I would just say it is God. As a child of God, He is always there and gives you strength.

When is your album going to drop?

The thing is that the album is ready but you know the way the music industry is, you have to push some singles first so I am pushing my singles first and more inspiration is coming in right now.