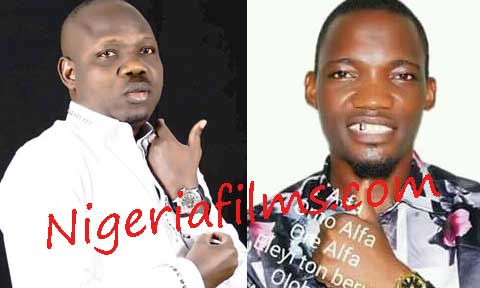 The Fuji Candosso himself Alhaji Sefiu Alao Adekunle, aka Baba Oko, is a lengedary Fuji musician whose record cannot be erased forever, as he has duely paid his dues and done well for himself in the entertainment sphere in Nigeria and world at large,the multiple award winning Fuji legend has been very steady in the game for years now and still continues to thrill music enthusiast with good songs.

Based on thorough investigation,it seems Sefiu has found a new love in the Fuji genre which is really creating serious underground issues among fans,musicians and Fuji authorities,we have seen and heard him in several events, live performances and shows displaying powerful and unbreakable relationship between him and Alhaji Adaradenu Jamaica, which we know it is unusual of the Fuji Candosso "Sefiu Alao" to display that kind of affection or put all his trust on one particular Artiste.

This gave us the absolute zeal to work up to Sefiu Alao to know more about this dude who is creating controversy among his contemporaries in the game and among Fuji fans.

Several stories have been heard about you and Adaradenu Jamaica, is there any secret between both of you? Adaradenu Jamaica is my son in the Fuji genre, he is very special to me, our relationship is beyond just music, but fatherly, apart from him being a Musician, he is also a Muslim Cleric with bountiful knowledge, humble, highly talented, God fearing and hardworking.

We talk like father and son, we are glued and nobody can separate us,anyone could be jealous,I do not send, mind you, who I love,I love, Adaradenu is my beloved son in whom I am well pleased.

This word " Adaradenu is my beloved son in whom I am well pleased" made me reminisce on what took place at an event,in Papalanto, Ogun State where Sefiu was on stage for more than three hours, singing and publicly declaring this same dude his son, showing great love and affection for him where other Fuji artistes and fans were.

In our quest in making sure we give you the best information you deserve ,we "Nigeriafilms.com"went further to Jamaica's residence for a brief interview.check this out.

It has been said that it is difficult for any Fuji artiste to rise or excel in Ogun State as far as Sefiu Alao,Baba Oko himself is still alive, what is your take on this? I do not attest or concur to such news or rumour, I believe what you have is what you get, if you have great and quality substance to offer,I believe people would buy your ideas. Likewise, if you sing a good song people would definitely love you and want to listen to it.

Alhaji Sefiu Alao is not that kind of person, his greatness today is as a result of his industrious work done from inception. The platform is there for anyone to explore and showcase what he or she has got upstairs. At least I am example here in Ogun state, if what you just said now is true,I do not think people would recognize me, let alone listen to my songs.

The issue of one dominating in one particular field is normal in any profession or field, it could be in politics, business, movie,sports, etc, even in your own field as a Journalist too. Is it not at a time the late Sikiru Ayinde Barrister and General Kolington Ayinla were reigning, look at 2 face Idibia, when 2 face was on board,it was as if no artiste would spring up again, but look at what the young ones are doing presently.

Look at lionel mercy and Ronaldo,So I believe one artiste or musician having dominion over a particular region is because of the talent he has and great works he has put together. Everyone has his own star, and I believe that Alhaji Sefiu Alao is not just a star,but a legend.

THERE HAVE BEEN QUESTIONS ABOUT YOUR STRONG EXISTING RELATIONSHIP, WHAT IS GOING ON BETWEEN BOTH OF YOU?

(Laughs) Sefiu is a father, he is a master, I love him, and I do not joke with him at all, he is an example of a good leader and mentor. We have been together for a very long time, we both understand each other and have respect for ourselves.People can say whatever they like, I do not see that as an impediment to our relationship.

Jamaica, who has collaborated with big names in the industry like Alhaji ,Wasiu Alabi Pasuma, Taiye Currency, Sefiu Alao and many more, is nothing but a prolific musician, he is currently the second power house of Fuji in the whole of Ogun State, after his godfather, Alhaji Sefiu Alao who is currently on top, Adaradenu has been in the industry for more than a decade, and has made impact both home abroad and has received diverse awards for his good works .

The Igbogila born Musician who has been recieving different accolades from Kings and other eminent dignitaries in Nigeria, especially in his very own State, recently released double albums titled God's time and Aponle Alfa, which are making waves in and outside the shores of this country. Currently, he is working on more jobs, and would be dishing them out before the end of the year.