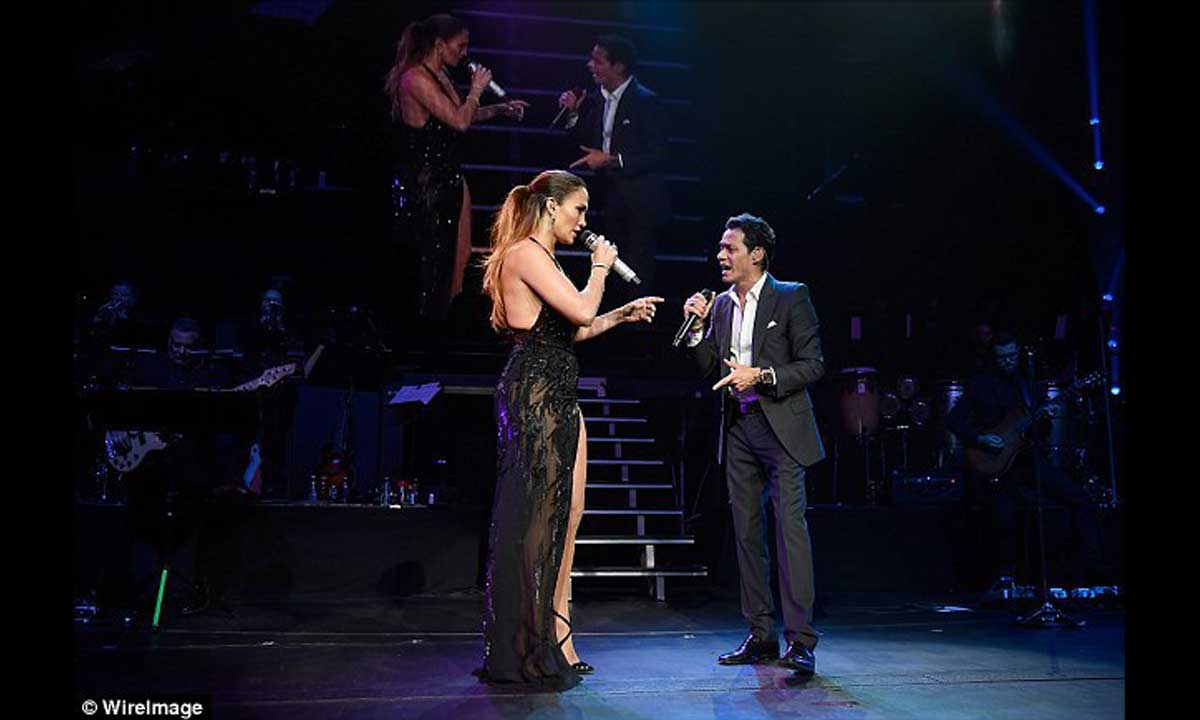 Jennifer Lopez reunited with her ex-husband Marc Anthony onstage over the weekend (27-28Aug16) to perform a surprise duet at a New York concert.

On Saturday (27Aug16), salsa star Marc graced the stage at the Big Apple’s iconic Radio City Music Hall for the very first time, and his former wife helped the 47-year-old make sure it was an unforgettable evening for everyone in attendance.

Jennifer’s hair was partially slicked back to put her transfixing features on show.

Her radiant features were highlighted with a coat of shimmering bronze eye shadow, long lashes, and glossy lips.

Dazzling the crowd in a floor-length black sparkly gown, Lopez belted out songs in Spanish with Marc during his The Private Collection concert, MailOnline.com reports.

The show was a full family affair, as Marc also brought out his musician father, Don Felipe Muniz.

Jennifer has remained close with the father of her twins Max and Emme, staying on friendly terms since they split back in 2011 after seven years of marriage. Their divorce was finalised in 2014.

And, just days before news broke last week (begs22Aug16) that the Waiting for Tonight hitmaker had split from her longtime boyfriend Casper Smart, Marc was spotted with his new wife Shannon de Lima at J.Lo’s residency gig in Las Vegas.

The couple was in the audience for Jennifer’s All I Have show at The AXIS auditorium in Planet Hollywood on 13 August (16), and following the show, they headed backstage and posed for a picture with the superstar and her then-boyfriend Smart.

News emerged of Jennifer’s break-up from her dancer beau on Wednesday (24Aug16), after a five year on-and-off romance.

Representatives for the pair have yet to comment on the split, but Lopez appeared to hint at her new relationship status on Instagram on Friday (26Aug16), when she shared a snap of herself during a break from filming her police drama Shades of Blue. In the photo, she posed beside a sidewalk street art piece which read, ‘Protect Yo Heart (sic)’.