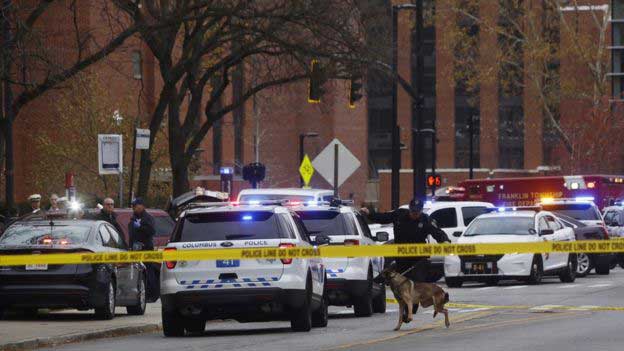 Abdul Razak Ali Artan, 18, rammed his car into a group of pedestrians on campus then got out and began stabbing people before police shot him dead.

Police Chief Kim Jacobs said they were investigating whether it was a terrorist attack.

Artan was a student at the 60,000-student campus in Columbus.

Somali-born Artan was living in the US as a legal permanent resident, unnamed officials told AP news agency.

Law enforcement officials quoted by NBC News said the attacker had left Somalia with his family in 2007, and lived in Pakistan before resettling two years ago in the US.

Asked at a news conference whether it could have been a terrorist act, Police Chief Jacobs said: “I think we have to consider that it is.”

He added: “Obviously with the purposeful intent that was noticed – driving on the sidewalk – we’re going look at it from the potential that it was planned.”

Authorities identified the officer who shot dead the attacker as 28-year-old Alan Horujko, who has only been with Ohio State University police since 2015.

The FBI has joined the police investigation.

The Ohio State incident began at 10:00 local time on Monday when a vehicle jumped the kerb at the campus, striking pedestrians near Watts Hall, the science and engineering building.

Ohio State Police Chief Craig Stone said the driver got out of the vehicle and began stabbing bystanders with a “butcher’s knife”.

A police officer who was nearby because of a gas leak shot the driver in less than a minute.

“I thought it was an accident initially until I saw the guy come out with a knife,” he said.

The college had warned students in a tweet to “Run Hide Fight”, warning there was an “active shooter”, though authorities later said the attacker did not use a firearm.

Hours later police declared the scene “secure”, lifting the shelter-in-place order and cancelling classes for the remainder of Monday, reports the BBC.

Campus director of public safety Monica Moll told reporters there was thought to be only one suspect.

Columbus Police sent a SWAT team, dog units, negotiators and a helicopter to the scene.

Federal officials from the FBI and the Bureau of Alcohol, Tobacco, Firearms and Explosives also responded.

In recent months, federal officials have warned about extremist efforts to recruit people for knife and car attacks, which are seen than easier for home-grown radicals compared to bombings.

The Islamic State group has urged sympathisers to use whatever weapons are available to them to carry out attacks.

It also called on followers to use vehicles to attack the Thanksgiving Day parade in New York City over the weekend.

Public school districts near to Ohio State placed their students on lockdown during Monday’s alert.

The attack came just as students were resuming classes following the Thanksgiving holiday, and after the university’s American football team defeated rival Michigan in a match that drew over 100,000 people to the Columbus campus on Saturday.