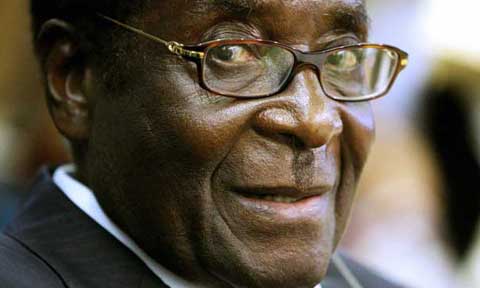 Zimbabwe President Robert Mugabe and his wife have been ‘taken into custody’ during an overnight attempted coup – after the army seized control of the capital’s streets and TV stations.

Reports that he has been removed from power – with speculation online he is ‘under house arrest’ – suggest that finally there’s an end in sight to the tyrant’s bloody 37-year reign.

The army confirmed this morning that the “first family” had been detained in what many international observers believe to be a military coup – amid rumours that the vice-president Mugabe sacked last week has returned to seize control ‘for the sanity of the nation’.

Other security forces are being urged to “co-operate for the good of our country” with the army which has warned that “any provocation will be met with an appropriate response”.

South Africa President Zuma said shortly before 10.30am UK time that he had spoken to Mugabe earlier today “who indicated that he was confined to his home but said that he was fine”.

There are unconfirmed reports that cabinet ministers and other prominent figures have either been arrested or are “on the run”. Bulawayo 24 News is reporting unverified reports that the Police Commissioner-General has been ‘shot dead’.

One prominent media figure, who MirrorOnline has chosen not to name, posted on Twitter that he was “sh** scared” – adding: “I am under my bed sobbing uncontrollable.”

Media agencies that have been able to get information out of the capital report that there has been “unrest” overnight – with at least three large explosions along with heavy gun and artillery gunfire heard – but the army is praising what’s happened as a “bloodless correction of gross abuse of power” rather than officially admitting there has been a coup.

The UK Foreign Office has advised Brits in the country to stay indoors “until the situation becomes clearer” following ‘unusual military activity’.

The FCO guidance said: “Due to the uncertain political situation in Harare, including reports of unusual military activity, we recommend British nationals currently in Harare to remain safely at home or in their accommodation until the situation becomes clearer.”

MirrorOnline reported yesterday how tanks had rolled into Harare – later backed up by armoured personnel carriers which stationed themselves at key points. Military vehicles blocked off roads close to parliament and positioned themselves outside the ruling Zanu-PF party headquarters.

Huge queues at cash machines were spotted as word spread that something was afoot and panicked residents tried to withdraw money from banks. Universities meanwhile have warned students to stay at home – and international flights are taking off and landing at the main airport where soldiers have also gathered.

One picture posted on Twitter showed that the President’s name had been removed from a street sign pointing the way to ‘Mugabe International Airport’.

Locals report there being an “uneasy calm” in the capital this morning. One Harare resident, named as Simba, told News 24: “We are in uncharted waters. Heavy military presence is causing a bit of tension in the country but no incidents of violence [yet].

“We have been advised to stay home but it’s generally safe. Roads toward parliament have been closed off. Some courts are not sitting today.”

An image shared on Twitter claimed to show police lined up on the ground being “detained at Parliament” with the caption: “Can’t sympathise with them.”

After taking control of the Zimbabwe Broadcasting Corporation, the army said this morning the military is targeting “criminals” around the President who had caused “social and economic suffering”.

The state broadcaster this morning has been playing what are described as “patriotic songs from the independence period of the 1980s”.

There is no official word on the whereabouts of 93-year-old Mugabe and his unpopular wife Grace, 52, who he was understood to be keen to take over the presidency after his death.

But they are widely believed to be in the custody of the army.
Source: 24News