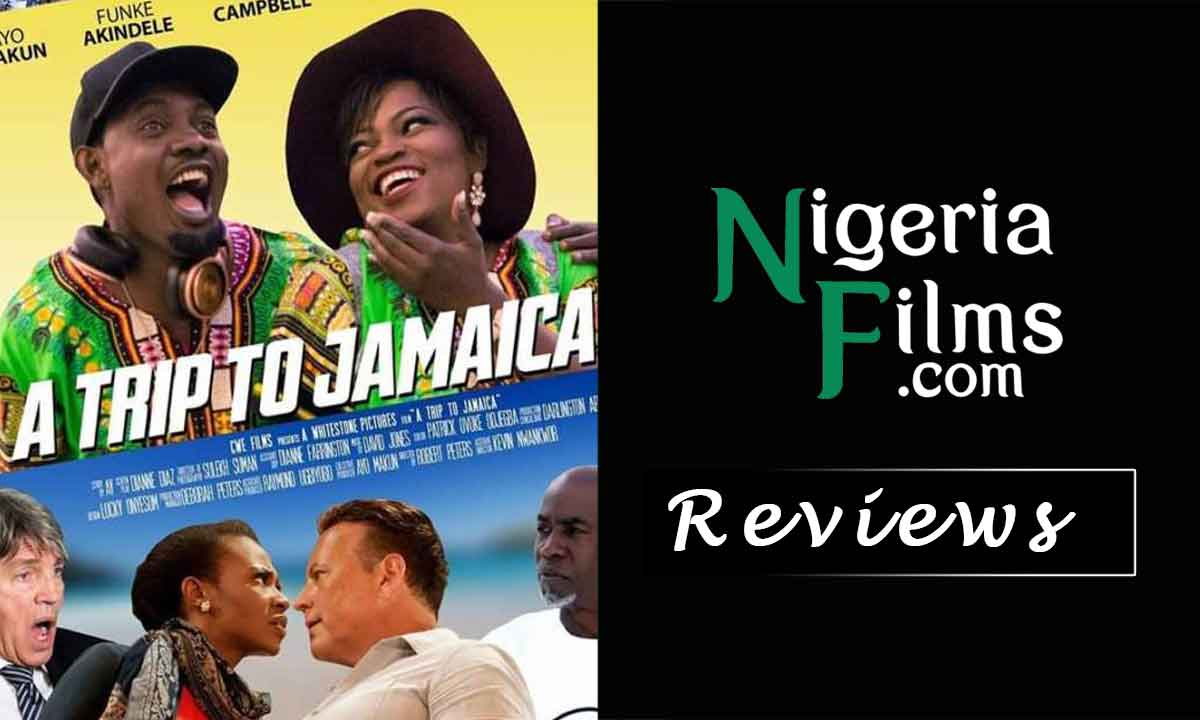 The much talked about movie, ‘A trip to Jamaica’, the supposed sequel to the commercially successful flick, ‘30 Days in Atlanta’ premiered last Friday and as expected, is already gaining traction across the cinemas.

The much talked about movie, ‘A trip to Jamaica’, the supposed sequel to the commercially successful flick, ‘30 Days in Atlanta’ premiered last Friday and as expected, is already gaining traction across the cinemas.

Going by its reception at the cinemas during the independence holiday weekend, tickets were sold out at most of the weekend shows.

With the ensemble cast in the movie, you might be pardoned if you are expecting a classic or an award winning flick, however, my critic rating of ‘A Trip to Jamaica” is C and theatrically pedestrian.

Starting with the cast, that is talking about the three main protagonists; Nse Ikpe-Etim, (Abigail) Funke Akindele-Bello (Bola, Akpors fiancée) and the main man, AY.(Akpors). For her usual standards, Nse’s performance was less than average. She was flat in her delivery, forced in her dialogue and totally out of depth and unnatural in her role. Abigail was supposed to be Bola’s sister and a Yoruba lady and she can’t string together a simple sentence in Yoruba language even when her sister went on and on in reeling out volume of overused Yoruba clichés. She failed to give life to the role and her characterization was timidly tepid and cold.

Personally, I like Funke Akindele-Bello and I believe she has done well for herself, and this depends on the perspectives you are looking at it from.  But with all her achievements and the success of the ‘Jenifa’ franchise, I typically don’t see Funke as a comic. For me, she is just not funny, but clowns around and this is because she is not a natural comic and isn’t talented for that genre of theatre. I will like to say it here, speaking bad English and mouthing street invectives and mannerism is so unfunny, uncool and utterly unnerving.

As Bola in the movie, she was completely at her wits end and completely all over the place. Her dialogue was rushed, repetitive and painfully boring. Her characterization was plain and poorly delivered, negatively unnatural and forced. Her portrayal of a typical Yoruba girl was overly exaggerated. All through the movie, I could not pick out a classic joke or line that is worth her appearance in the flick, except the number of times she called sis and Akpors. Ooops! That make-up, a full powdered face at the beach, who does that?  For want of a stronger word, her performance was simply atrocious.

For the main character, AY, undoubtedly, AY is a very successful comedian, at least in the Nigeria context; rich, popular and influential. Even though, he is not your usual naturally gifted and funny comic, but a damn good professional comedian and entrepreneur.  He sometimes come across as cocky and downright arrogant, but blame him not, success sometimes comes with a pinch of airs and nose-raising.

That said, as Akpors in the Trip to Jamaica, AY didn’t ‘try’ at all. He was flippantly spontaneous, repetitive, tried too hard to please and brazenly tripped over his lines. The scenes, the actions and the plot were a rehash of the ’30 days in Atlanta’.  And seriously, the ease at which beautiful ladies swooned for Akpors in both 30 days in Atlanta and A Trip to Jamaica makes one wonder if it’s the look, the jokes or the swag?

For all we care, the flick could have been titled ‘The Adventures of Akpors 2 or fittingly, ‘Akpors’… You don come again?

I will not bother to review the appropriateness or the performances of the rest of the cast, for they were simply slapdash and agonizingly head-scratching. Or how do you explain a situation where a supposedly ordinary guy will disarm a trained and professional hitman and even outwit a so called professional criminal and the dreaded ‘Don’ Casper.  Excuse me?

All said and done, with a Trip to Jamaica, we weren’t expecting to see a classic or an award-winning epic, but a thrilling and captivating display of jokes and comedy performances. So, my take, A Trip to Jamaica does not look like a sequel to 30 days in Atlanta, but probably a spin-off, depending on who is watching,  it’s obviously not  theatrically amazing, but definitely hilariously amusing.

My tip: Go see it in the evening of a boring working Monday or on a Friday evening after a dreary raining day and you’ll might just get a lift and shake off the day’s gloom.

Have you seen ‘A Trip To Jamaica? Do you agree with Babatunde? Let’s talk about it in the comments section!

30 days in Atlanta Trip To Jamaica