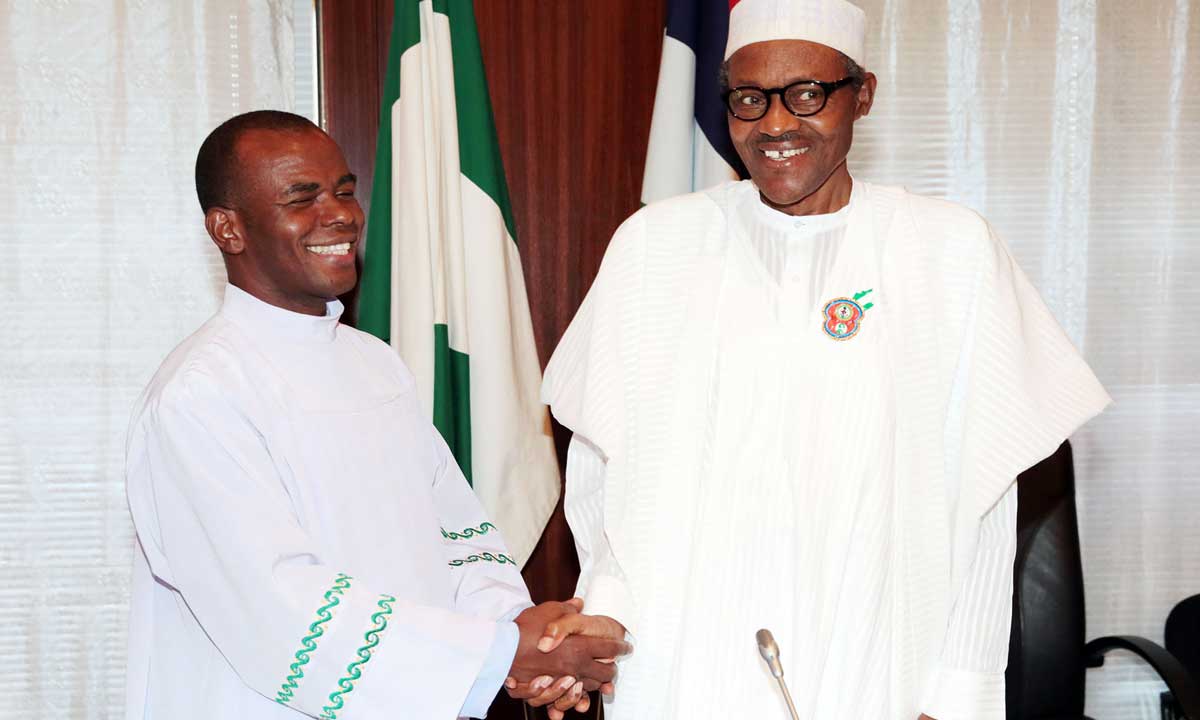 Mbaka who was clarifying his recent statement ‘Bless and Be Blessed’ said it was largely misunderstood to mean that he attacked or blamed President Muhammadu Buhari for the economic crisis.

He said he merely drew the president’s attention to the level of suffering in the country and tried to suggest the way out.

Maximus Ike Ugwoke, spokesman for Fr. Mbaka, in a statement entitled “FR MBAKA’S ASSERTION ‘THERE IS HUNGER IN NIGERIA’, NOT AN ATTACK ON PRESIDENT BUHARI” quoted Mbaka as saying that the PDP, rather than apologise to Nigerians for its alleged misrule, has launched an “iniquitous planning about 2019 election for them to continue from where they stopped.”

“They should not be foolhardy,” he said.

“All these years of Jonathan, nothing happened in Niger-Delta specifically to be recorded in the annals of history. What a shame! What an embarrassment!

“The place where the oil has been coming from remained underdeveloped under a man from the same soil. If you go to Niger Delta today you will cry. But what worries me is that our people are good in shifting blames.”

Continuing, Mbaka said: “There is a sword that is moving about in the country. People are dying like flies. The sword of hunger is eating the land. And as I have told you this is just the beginning. If anybody is telling you it is going to be well very soon that person is deceiving you. “This is because many of us were among those that were alive during the years of the past government. The past PDP government was a grasshopper and locust to Nigerians.

“The impact of their horrific mess is yet to be felt. It was a regime where hooliganism became a political slogan; where looting became the order of the day; where the neglect of youths became a pattern of administration. The result is what we are passing through now. Hunger is everywhere; the hunger was created before this new government came in. Buhari is not the maker of the hunger.”

According to the cleric, “The hunger was created during the Jonathan PDP administration but Buhari should abate the long procrastination, bureaucracy and slow methods in tackling it.

“Understand it very well. People will know the truth and the truth will set us free. Buhari is just an agent of change. The money in our treasury was nothing to write home about before this new regime came. The country was in an embarrassing mess.

“Apart from the petroleum that we sell and get money, what other means of foreign exchange do we have? The foundation of the Nigerian economy is oil which has now collapsed and the foundation once destroyed what will the just man do? Psalm 11:3. The past administration did not prepare this administration for this season. That is why the sword has risen. Many will die by this sword but there will be survivors.

He added, “I am just telling President Buhari that people are hungry because he cannot not come to the street like me and notice people’s feelings. But Buhari is not the author of the hunger. The past government planted the tree of hunger and they want to come back to water it.

“If it is in a developed country by now from the Senators to the Reps, to the governors, all who participated in the last administration should have resigned with apologies to our youths; otherwise the youths one day will begin to stone them.

“They will soon confuse you that present governments don’t want to feed you, feed you with what? It will surprise the whole Nigerians to know that even after Buhari was a petroleum minister and a military president of the country, he had no oil bloc. Is it not a shock? Don’t you hear the quantum of money that is being recovered from one person? Buhari just came as a redeemer. I don’t know if the people of this country are hypnotized.

“How can we be fighting somebody who is fighting for us? Apart from this Buhari, how can somebody talk to these political juggernauts and tell them to bring back what they have stolen?

“It is only a personality like Buhari that can enter into the cave and catch a lion and kill a lion in a snowy season and come out. The president needs support. He doesn’t know where to begin because there are many holes dug for him by the past administration, and they carried the sand away expecting him to cover the holes with what?”

Ugwoke said that contrary to media reports that Fr. Mbaka attacked Buhari, he “merely restated the obvious sufferings that Nigerians are facing (which even the president himself had at points acknowledged and sued for patience and perseverance) and advised the president on the ways to tackle it i.e. by engaging economic gurus and listening to good advisers.”

He added:”We wonder which portion of the message could be viewed as ‘an attack’ or ‘bombing’ of Mr. President as twisted in the media.

“The acclaimed message of the cleric to Mr. President, to us, is rather a further demonstration of the cleric’s love to see that the president succeeds in his messianic rescue operation in Nigeria and that is why it is devoid of hypocrisy.

“It is obvious that those who are arm-twisting the said message of the cleric to Mr. President as an attack on Mr. President are those who want the president to fail or be blindfolded so as to use the obvious hardship Nigerians are facing as a weak point of his administration to ride onto power mindless of the fact that Mr. President has done so well in fighting corruption and insurgency in the country, which are mega achievements that scores him above average in just few months of his administration.”

Mbaka hailed Buhari as a gallant warrior and urged him to continue his battle against corruption and insurgency, pointing out that but for his onslaught against Boko Haram, many Nigerians would have stopped going to church and mosques by now.

“Buhari is not the cause of corruption and insurgency yet he is fighting them frontally.”

He enjoined him to also square up to hunger to save many Nigerians from dying hopelessly.