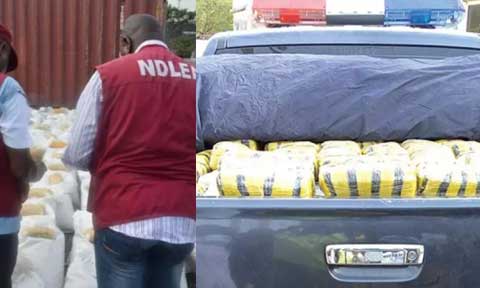 Operatives of the NDLEA has intercepted a suspected police van loaded with over 700 tonnes of India hemp worth millions of naira in Kano.

Operatives of the NDLEA has intercepted a suspected police van loaded with over 700 tonnes of India hemp worth millions of naira in Kano.

Operatives of the NDLEA has intercepted a suspected police van loaded with over 700 tonnes of India hemp worth millions of naira in Kano. This was made known to journalists on Wednesday, April 26 when they were conducted round the confisticated items at the state command of the agency.

Commander of the NDLEA in Kano, Hamza Umar, revealed that two suspects, including the driver were arrested in police uniforms.

According to Hamza, the suspects were caught in a brand new Toyota Hilux masked with security siren and a private plate number, Pilot 1.

Hamza hinted that the vehicle, which originated from Esuba, Edo state, was heading to Gezuwa in Yobe state, but was arrested following an intelligence report.

Atfer thorough investigation, the suspects according to NDLEA boss were discovered to have impersonated the police force to scale through security search. Hamza said: “Our men intercepted the vehicle, which was typical of security utility vehicles. The two suspects arrested were found in police uniforms but after interrogation, they confessed the uniforms were gotten to disguise as policemen to evade search at police checkpoint. “I am sure if anybody sees them in this vehicle and the security uniform, nobody will dare to stop them. But from intelligence gathering, we were able to detect and arrest them.

Investigation is still ongoing to unravel the sponsors of the drug suspects.”

One of the suspects confessed that he got the police uniform from a serving police officer in Port Harcourt.

Meanwhile, the Nigeria Police Force has denied claims that documents related to the 2017 budget was taken away from the Abuja residence of Senator Danjuma Goje by their officers. The police said reports that 2017 budget document were taken away from the senator’s house during a search operation is false, misleading and capable of misinforming Nigerians.

It also said a search warrant was duly obtained from a court of competent jurisdiction for the search which was professionally conducted.