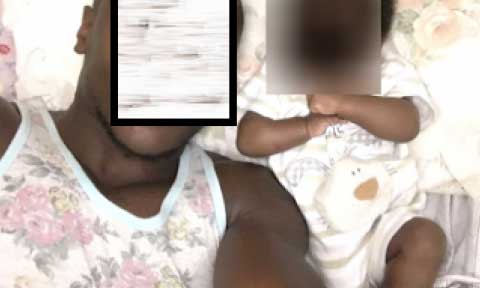 According to him, he was scammed into believing that a baby boy whom his lover had for another man was his. Read his story below...

"My name is Goodluck but my friends in Ghana call me Burly. The incident actually happened when I was younger and in Ghana and the lady involved is a Ghanaian. I met this lady at a gold shop in Accra, Ghana in early January 2016 and we exchanged numbers. Weeks later, we got intimate and then in February 2016, she called me that she was pregnant for me.

In Ghana, they take issues of men getting their girls pregnant seriously. The lady's eldest sister, a nurse, called me and told me that I have gotten her sister pregnant and that they only need me to take responsibility for the child.

The sister told me they do not need my money. I said if it is my child, I cannot deny it. I am a man and I can take care of it. They started collecting money from me when she was 2 months into the pregnancy. In a week I was been charged 1,200 cedis that is like N120,000. I asked for a pregnancy test to confirm if she was really pregnant.

We went to the hospital and they confirmed that she was pregnant. I wasn't allowed in when she was running the test. Normally I was paying for child support. Then one day I said to her, you are just two months down and I have been spending so much already. At a time she said she was going to go for an abortion. On that good day, she called me and said Goodluck I have terminated the pregnancy, you can go your way now and I don't want to have anything to do with you. 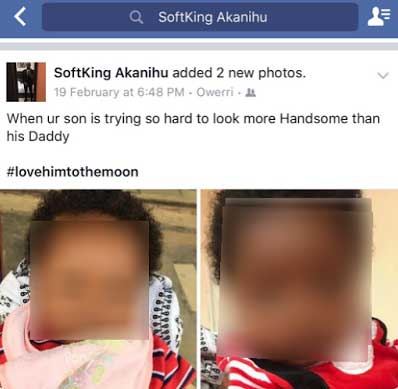 We lost communication for like five months and then suddenly, she contacted me again when I was in Dubai and sent me pictures of the baby, complaining that I was in Dubai chilling while she was in Ghana suffering with my baby. She sent me photo of the baby. I had to come down to Nigeria to show my mom the pictures and she was like this was how you looked when you were a baby.

I said oh really, then it's my baby. I went to Ghana to take responsibility of the child but before she allowed me to see the child, I had to buy two iPhone 6+ for her and her big sister before I could get access to the child. Before I could come around, I have to call her, that I'm coming to see the baby. So when all these things were happening, I kept insisting that we go for DNA so I can be sure. But the girl ignored and kept playing around, she even told me that if I confirm and the baby is mine, am going to lose custody of the child"

Asked why he was insisting on having a DNA, Goodluck replied "How can you just pop up from nowhere and say this baby belongs to me when we lost communication for like 5 months? She saw my pictures that I posted when I was in Dubai and then contacted me. I was like can we go for DNA test so I can be sure that this baby belongs to me. She said DNA test is expensive. I said she should not worry abut the money. She came up with the threat that if I continue asking for a DAN test and if we then confirm that the baby belongs to me, I am not going to have access to the baby again. So that was when I went cold. I didn't complain again. So one day, my brother came down to Ghana from Nigeria and asked to see Najib, my son. I didn't call the lady that I was coming because normally I must call before coming to see Najib. So that day, I just took her by surprise. I gave her an unannounced visit. My dear, that baby wasn't her's. She was never pregnant.

She taking a neighbors child to run the scam.That day, I drove there with my brother. There is a store before her apartment and I saw a woman carrying this baby. My brother was like who is this woman carrying Najib? I was like that is my girl's neighbor and by right, she has access to carry Najib. I went to the girl's house first and I didn't meet her. I met her sister who was shocked that I didn't call her that I was coming. I was like can I see my son, I am here to see my son. She was like which son? Do you have a son? I was shocked. I was like, don't you know me? I have been giving you guys money.

I went downstairs to meet the woman carrying my son and I was like please give me my son. The woman was like what are you saying? Which baby belongs to you? I brought out pictures. I opened the trunk of my car to show her things I bought for the baby. The woman was like what am I even saying. The woman now brought out her breast and started breastfeeding Najib. That was when it dawned on me that I had been defrauded. There was an elderly man there who called me and told me that the baby in question is his grandson, his son's son.

I arrested her and jailed her at Accra police station. After a while, I was like I found out the baby wasn't mine and there was no need prosecuting her. I just stopped the case. I came back to Nigeria from Ghana two months ago and I have said whenever I go back, I would still go and see Najib because I still have that feeling of that I have a child somewhere. When she told me she was pregnant, I was so happy that I have a child and then waking up to find out the baby isn't yours. The feeling is bad. Najib's mother did not know her son was been used to carry out fraud".

On why he did not expose her on social media, Goodluck said " I don't want to implicate her because where ever she is now, I don't know if she's happily married. I don't want a situation whereby the person dating her will get to see this and want to break up with her. That was why I published on social media without details".

Goodluck added that he bailed the girl from the police station and allowed the case die down.