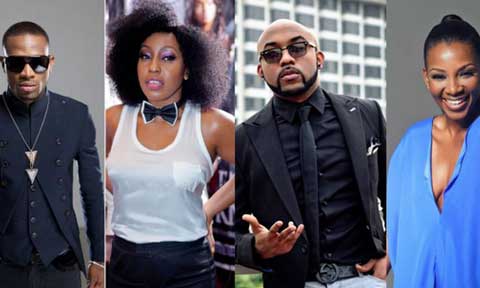 But, I force and expect people to be human. Human enough to try to put your legs in the shoe of your fans and other human beings sharing this space with you.

Well, I can remember when there was a problem in France, our own celebrities took to their Instagram and Twitter handles to form ‘dis thing touch me o’. Another happened a while ago in Manchester during a concert.

Our celebrities once more became Manchester fans. Every celebrity’s heart began to go out to the families in UK.

Greenfel tower saw itself under the hammer of fire and life’s were lost immensely.

Our celebrities once more, ran to Instagram to do the hashtag for the abroad people.

I in all honesty do not have anything against them for praying for Manchester victims and all.

But, I have a problem with them praying for abroad people and doing eyes right when their backyard Ikorodu is on fire.

I didn’t see any celebrity that prayed for Ikorodu or the lekki flood victims.(maybe they did but I didn’t see it they way I saw other ones)

Rather, comedians took to their Instagram handles to mock the occupants of Lekki.

If it was new jersey that was flooded today, you’ll see hashtags flying around Instagram like hungry bats.

Because its Nigeria where more of their fans who pay to watch them lives. They did eyes right as if they are oblivious of the issues.

Ikorodu occupants sleep with their hearts in their mouth almost every night because of Badoo people. Many have been killed, some other Inocent people have been mistaken for Badoo and killed accordingly.

Our celebrities who without their fans are nothing refused to at least do a ‘pray for Ikorodu’ picture.

Dear celebrities, if you know the power you have, you won’t make a mistake as this.

Do you know how your fans who liked your ‘pray for Manchester’ posts feel when they saw you sharing and making jokes about the flood?

Do you know how the families of Badoo victims will see you post picture after picture without you acknowledging the fact that a fraction of your fans are under threat.

Nobody is begging you money.

Just a tweet, a post somewhere will go a very long way in putting a smile on their faces.

Forming humanist for abroad people and switching to ghost mode for your own people is heart breaking.

Sometimes, your fans don’t need your money or a selfie. All they need is you to show that you care for them the way they do.

Mark Anthony is a young writer that doesn’t respect himself. He can be reached via This email address is being protected from spambots. You need JavaScript enabled to view it.