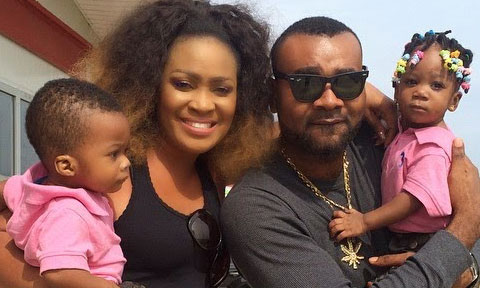 We have watched so many celebrity marriage crashed after doing elaborate wedding which they often attributed to irreconcilable differences.

Last year, Prince Eke had an emotional outburst where he changed his profile on social media to single father of three.

He further made it known that his wife Muma Gee has abandoned her kids for three months to have enough time with her new found lover.

Many chastised him for washing his dirty linens outside but then just shortly after his outburst; Muma Gee responded that she was away for that long because of her career.

A new development shows that the couple drifted apart even before his social media rant. It was said that they have been living separately for over three months now.

He said: “The thing is, there is a straw that breaks the camel’s back and when it does, you find out that probably all the beautiful years you had were just a mirage. Marriage is meant to be enjoyed not endured. We have been separated for about 3 months now. I don’t need to agitate about who should have custody of the kids. To be honest, I won’t be able to take care of them like a mother would and they are too tender. They are with their mother. I allowed that because I can’t take care of them for now. They will probably slow me down and my job also restricts me.

I don’t feel good speaking about my private affair in public but the reason I had to speak out was because at that point, for 3 months Muma Gee was no were to be found. People said they saw her in Abuja. “I saw your wife in Abuja o, with the crazy hair that she made” but all the same, It’s her life not my life. I had to go to the social welfare for kids, they invited her. They almost arrested her before she now came back and carried the kids. The next thing she did was to snap photos with the kids and put up on social media. Why I spoke out at the first instance was because I felt so bad. No matter what, no matter whom you have met now or that Mr right you have now, that person is not enough and shouldn’t be capable of convincing you to abandon your kids for that long. For you to be convinced to abandon your kids for that long means that maybe something has been going on while you were still with me or you feel with this person, I have got everything that I wanted but have you asked yourself how old am I? Will I be able to have kids again?  I felt so bad. Why will a woman abandon my kids? Assuming she went with them, I wouldn’t have minded but when I come around her house to see my kids because we don’t live together, I find out they are with the nanny. Why? And I will be on location and the nanny will call me and say my child is vomiting. What! Where the fuck is their mother? If you are married you will understand where I am coming from. It’s so painful and a lot of my friends were like ‘don’t put your family matter on social media’ but I needed to explode. I didn’t even read the comments on blogs because I knew people will call me names and insult me but all the same, thank God I did that, I have moved on.”