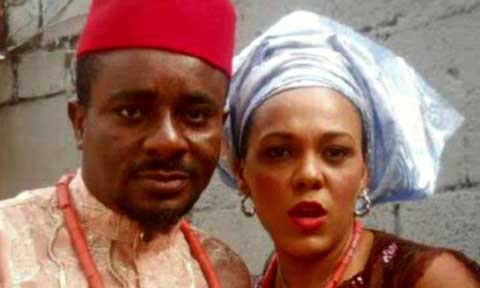 His wife, Emma who had filed for annulment of the marriage over verbal abuse and domestic violence was given unrestricted access to the kids.

On what looks like a progress for Emma who has been estranged from her kids for almost five years after being denied access by Emeka who had allegedly  brainwashed and instilled hatred in their hearts towards her.

Emma was said to have been assisted by Chris Okotie to get her life back to normal, but Emeka had disclosed that an affair was going on between the duo.

On her plans to have a press conference regarding her marriage brouhaha, Emeka friends have being attacking her on social media.

What we don’t understand is why Emeka Ike and his friends are so disturbed about the undated press conference Emma is set to have.

This appears like they are trying to bully her from continuing her plan of having a press release regarding her marital issues.

Is Emeka Ike Afraid of Something that Emma might be unveiling soon? This is a question we do not have an answer to and would really want to know.

He wrote: “It’s about time we all think deep into stories to spore hatred and damage a talented and vision driven, hardworking man. His wife has left his house for over 5years abandoning her 4 little children only for reasons best known to her.

I am close to Emeka and he has beautiful kids, only to find out from the Kids all that she had done and all what she said Emeka did are all lies, accusing him falsely and trying to ridicule a Nigerian star.

Now we have kept quiet for too long, allow time to run by to allow them to settle their differences but what I've found out that some disgruntled wealthy men are bent on wrecking his home and taking his wife as their slut. Okay now, take the wife and leave this guy alone!!!!wetin??

He told the court, he wanted her back, a pastor rented a house and man bought her a new car, take her oga and let this guy’s live in peace, he has moved on with his Kids, all 4 of them,  happy with their new lives and he has built his business back and his reputation stable.

His wife is making more money now, so why is she still having Emeka's time, why is she spending this amount of energy on a dude she claims hurt her. She really thinks her hurting Emeka, No. She traumatizing her own children not Emeka, I'm old enough to smell b.s from afar but the kids aren't. They are ridiculed in school because of their mothers posts which they know are all lies. Who knows Emeka wife's name, but because Emeka is a celebrated actor, she thinks she's hurting him at the end of the day which wife beater is ever given custody of 4 children.

Going about acting a slut to a pastor will not help you because the other women that have passed  through that process are all junkies now because your pastor lover lace them with drugs before sex. You will end up dismantled and deformed like the other women of Pastor Chris Okotie.

Do people go around having press conferences over family matters? people enjoy thriving on others people's despair, Everyday is for the thief one day for the owner of the house.

I AM MY BROTHERS KEEPER"