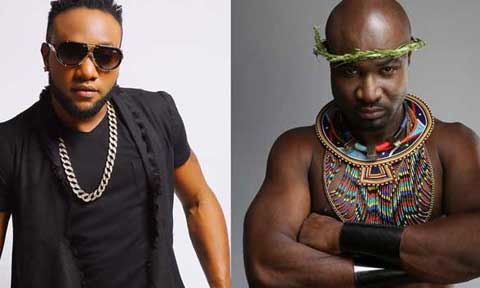 When he joined KeeCee’s led Five Star Music and wrote few of KeeCee biggest hits without receiving enough credit, according to the star singer, he was left with no other choice but to depart Five Star Music. But thereafter, law suits and multiple allegations followed and no one really knows the facts but left with two sides of the story.

However, with the release of Harrysong’s latest smash hit single ‘Arabanko’, it seems Harrysong has decided to bear his mind, through the song, on a couple issues that have been raised during his legal tussle with KeeCee and Five Star Music.

The first issue reported as being responsible for Harrysong departure from Five Star bothers on when it was Harrysong’s talent in song writing and production that made their partnership successful? Or whether KeeCee’s voice and financial power made their estranged union click?

Harrysong, in the song Arabanko, seems to have given his opinion that KeeCee should have been grateful to him because before his arrival, there was the money and KeeCee’s talent, but after his arrival, all things clicked.

He summarized this when practically called KeeCee an empty vessel and a back stabber in these lyrics “I cook food say make you come chop you use am against me, put me for cooking pot, empty gallon when I help fill water.”

In his lyrics, Harrysong mocked Five Star Music’s source of wealth too because the lines “since Linda chop chinwe banana and politicians no come dey pay again” suggest Five Star Music may have been involved in pimping girls for politicians and that something went wrong with the alleged pimping business, which forced the backers to withdraw.

Backing this up, Harrysong sang that Five Star was now jealous of his new found richer partner and birth of his twins. “I born twins, dem jealous me… I get another sponsor, dem jealous me oh.”

His arrest by Five Star Music and other reported confrontations were as well spoken about in ‘Arabanko’ with Harrysong accusing Five Star of trying to assassinate him. He even went a step further in the music video to announce to KeeCee that he was ready for war by pulling a gun. “Dem send hired killers to come finish me But Jehovah say my pikin no go die”

He also prophesied to himself and his label Alter Plate, saying it was the new king of the music industry. He even said there were things he would have said, but kept them to himself.

He claimed in the song that he opened the can of worms because he was pushed to the wall. “Everywhere I go grace dey follow me…Alter Plate everybody celebrate…Insult upon insolence I don see…I been no wan talk, dem dey fire me.

The song was not all about accusations of jealousy, assassination and struggle of intellectual property right, as Harrysong did a good job in the delivery of the song.

The upbeat nature of the song will keep million on the dance floor for a long time to come.

The fact that the lyrics can be used as materials to fuel street beef means Harrysong has got the hit that will finally take him to greater height on his hands.