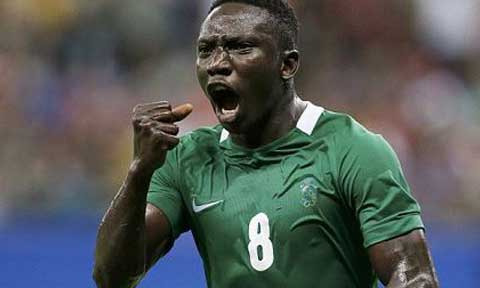 Turkish powerhouse Fenerbahce have  jumped to the front of the queue to sign  Leicester City  and Arsenal target  Oghenekaro Etebo from Portuguese side Feirense.

The combative  midfielder, who is expected to start for the Super Eagles against Senegal’s Teranga Lions in their friendly affair in London on Thursday, has been in sensational form for Feirense, becoming a cult hero at the 5,401-capacity  Estádio Marcolino de Castro since his arrival from Warri Wolves in 2015.

Etebo, who  has been likened to Manchester United  midfielder Paul Pogba  for his creativity  and combativeness, has been linked with Premier League holders Leicester  and  struggling Arsenal for a summer transfer.

But  reports in the Turkish media  claimed that Fenerbahce met with the player and his agent  in the Eagles’ Crowne Plaza Hotel camp in London on Wednesday and that the result was positive.

Some sections of the media in the European country had reported that Fenerbahce’s  representatives would  meet with  Etebo this month.

According to  Fotospor, the Yellow Canaries’ representative  Hasan Cetinkaya told Etebo the  plans they had for him and urged  the 21-year-old to join up with his compatriot Emmanuel Emenike, who has resurrected his career since he returned to the Istanbul giants after  a bad loan spell at West Ham.

Turkish Football said Etebo’s agent met with Fenerbahce and agreed a deal in principle, adding that the Fenerbahce only needed  to strike a deal with Feirense before a contract can be agreed.

Etebo became one of the hottest properties  in Europe  after helping Nigeria win bronze at the Rio 2016 Olympic Games.

The player, who was instrumental in the Eagles  Russia 2018  World Cup qualifying victories over Zambia (2-1 in Ndola) and Algeria (3-1 in Uyo)  last year,  has provided one assist and scored one goal in 15 league appearances this season for Feirense.

Meanwhile,  Enugu State Football Association Chairman Chidi Offor-Okenwa has advised the  Eagles to approach their  match against Senegal and Bukina Faso with determination.

Offor-Okenwa told the News Agency of Nigeria in Enugu on Wednesday that the two friendly matches were international games which still needed to be played with seriousness.

He said, “The invitation of new players shows that there are discoveries and it is left for players to capitalise on the opportunity and cement their stay in the team.

“There are specialists in every area. So, the technical crew knows better and they know that the players will do the job for them.

“As for me, invitation of players for the two matches was on merit and based on the coaches’ game plan.”