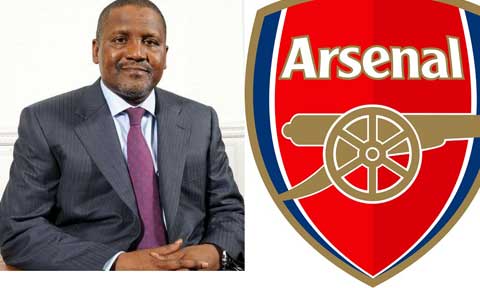 Africa’s richest man Alj. Aliko Dangote has once again confirmed that he is interest in buying the controlling shares and take control of Arsenal football club in London even as he promised that the present manager Arsen Wenger will depart the club if he succeeds.

READ ALSO: Why I Will Never Sleep With Any Politician -Actress -Georgina Onuoha Boast

In a recent interview, the business magnets reveals that he will not bid for the club at the moment but he will do just that when he is done with his refinery projects.

If his drive to take over Arsenal is not successful will he take on other clubs, I don’t change clubs. Even when Arsenal isn’t doing well I still stick by them. It’s a great team, well-run. It could be run better, so I will be there. I will wait. Even if things change I will take it and make the difference going forward.

How show is Dangote that the present crop of businessmen that run the club will be willing take his offer “Well, you know anything is possible in this world. If they get the right offer, I’m sure they would walk away. We’ll be in a position to give them the right offer. They will not hold ­Arsenal forever. Someone will give them an offer that will make them seriously consider walking away. And when we finish the refinery, I think we will be in a position to do that.”

On ther first thing he will change Dangote was emphatic in his response The first thing I would change is the coach. He has done a good job, but someone else should also try his luck.© Nigeriafilms.com