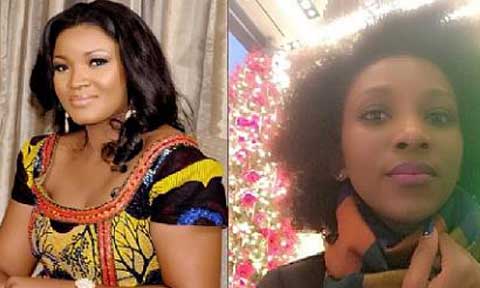 In no particular order, we decided to rate them in terms of their achievements, endorsements, philanthropy, people's choice, popularly and other factors. A few days ago, Yahoo, listed her as one of the 'highest grossing movie stars you have probably never heard of'.

In 2013, she was honored in Time Magazine's list of the 100 most influential people in the world alongside Michelle Obama, Beyonce, and Kate Middleton.

Omotola who is not just a beautiful and well-endowed woman but also a great achiever recently marked her 18th wedding anniversary to the love of her life, Capt. Matthew Ekeinde and they are blessed with four lovely children.

Since her Nollywood film debut in 1995, Jalade-Ekeinde has appeared in over 300 films, selling millions of video copies. She is the first African celebrity to receive over 1 million likes on her Facebook page.

Few weeks ago, the Ondo state born chieftaincy holder bagged several products endorsements including that of Pampers range of baby diapers. After just two days of being unveiled as the Brand Ambassador for Pampers this year, online retail store, Konga also made the popular Nigerian actress its new face. OC Ukeje (The Man To Beat)

Aside carting away AMVCA's Best Actor of the year, Okechukwu Ukeje also has to his credits other movie-related awards including 'Best Actor in a Lead Role' at the Best of Nollywood (BON) awards, 'Best Actor Award' at the Nollywood Movies Awards where he was rewarded with a brand new Nissan car.

With a unique combination of good looks, an acting prowess, and a great voice, Ukeje has set himself apart as an effervescent actor to reckon with. He stands tall with his phenomenal rise, large fan base, cult-like followership, and of course, the anticipated recognitions from industry stakeholders.

Ukeje might not have starred in over 50 movies, but the few he has done are outstanding. Half Of A Yellow Sun, Two Brides And A Baby, Hood Rush, Alan Poza, Comrade, Confusion Na Wa, The Awakening, Black November , and Gone Too Far are some of his movies.

During the year in review, O.C signed the dotted lines with his Heartthrob Ibukun Senami Oluwa Togonu. Nollywood actor, Temitope Christopher, popularly known as Tope Tedela was a relatively unknown face in Nollywood until he beat several established names in the industry to emerge as the Best Actor in a drama at the 2014 Africa Magic Viewers Choice Awards. That seemingly became the turning point for the Mass Communications graduate of the University of Lagos, as he ended up grabbing more awards throughout 2014.

The handsome young man is an avid guitarist and an occasional model, he enjoys reading, writing, playing the piano and board games.

Tope Tedela is an Actor/ Voice-Over Artist and a Broadcaster. He is a Nigerian from Ekiti State.

His foray into professional acting began when he was cast as Julian on popular TV Drama: Edge of Paradise while still in school. After a hiatus to complete his degree, he returned and now acts full time, On stage, he has been part of several performances like Ola Rotimi's Man Talk, Woman Talk and he has since gained a lot of on-screen credit both for movies and TV. During her two years break from Nollywood, ageless beauty and veteran actress, Clarion Chukwurah has been touring three countries following her position as a special UN peace envoy.

Upon her very noticeable return, she bagged a prestigious award in recognition of her
contribution towards the development of the Nigerian film industry; Legends of Nollywood's award, for her outstanding role in Mirror in the Sun.

Aside from many other awards in her archive, in 2014, the proud mother of the multi-talented international award winner, Clarence Peters also smiled home with another notable award.

Clarion won the Best Actress in a Leading Role award at the 10th edition of the Africa Movie Academy Awards for her marvelous performance in the movie, Apaye.

She was in the news earlier last year for her verbal war with the outgoing President of Actors Guild of Nigeria (AGN), Ibinabo Fiberesima. Despite all the controversy surrounding her as President of the AGN (Actors Guild of Nigeria), Ibinabo Fiberesima still stood unshaken and have been enjoying fame, fortune, and good family.

She's now happily married to her sweetheart, Uche Egbuka in a traditional ceremony in her hometown of Okrika, Rivers State.

The single mother of three whose controversial visit to the President's Villa has been raising eyebrows also never relented in taking care of ailing members of her guild during the year in review.

She owes her efforts, success, and gratitude to President Goodluck Jonathan after writing to him for support of her ailing colleagues and members. Stephanie Okereke Linus is forever looking young and stylish. The Nollywood actress who has proven that there is much more to being a celebrity than fancy clothes and money has much to offer to the troubled women.

She has been raising awareness and spreading the word on the dangers of Vescio Vaginal Fistula, otherwise known as VVF. She kicked off her project in Ogoja, Cross River State as part of efforts to finance 22 women through surgery and work through recovery for VVF.

Happily married Mrs. Linus, who schooled in Calabar where she heard and witnessed various cases, has become an advocate for change and awareness under the umbrella of her NGO Extending Hands.

On the 1st of March, the authentic Dutch wax brand Vlisco launched her second Vlisco Women's Month campaign with the beautiful leggy actress as the face of this campaign.

She has also partnered with NGOs in other African countries like Liberia and Sierre Leone. The A-list Nollywood producer, actress and style icon was also Celebrity Guest Judge for the

Episode three of a task in the Fashion ProtÃ©gÃ© show all in 2014.

A few days ago, in collaboration with Diamond Bank, her NGO saw 15 women suffering from VVF through a successful surgery. Genevieve Nnaji (The Most wanted)

Aside from being the Celebrity Crush of different male personalities in Nigeria entertainment industry, delectable Genny, as she is fondly called by her fans has made it known that she cannot come back into an industry characterized by mediocre who churn out bland, dull, uninteresting, predictable and unexciting movies every other time.

Genevieve has taken her art to an international level and has acted in such movies as Mirror Boy, Ije, Tango With Me and Half of a Yellow Sun. She does not see herself lowering her standards to accept scrappy scripts all in the name of acting in Nollywood.

Genevieve Nnaji is the new brand ambassador for a telecommunications company - Etisalat Nigeria. The deal is reportedly worth N100 Million as well as Amstel Malta Ambassador. Just at the beginning of the year, 2014, delectable Nollywood actress, Rita Dominic joined the league of celebrities who have grabbed mouth watering endorsement deals.

The award-winning actress and movie producer was unveiled as the new face of Keystone Bank and Zaron cosmetics.

She added several awards to her credits; Best of Nollywood (BON), GIAMA and so many other nominations.

Aside from her endorsements and acting skills, the superstar is well known for her unbeatable dress sense and poise.

The Imo State born Nollywood also won the most Fashionable celebrity from many fashion writers. She is a star to beat on the red carpet, any day any time. Painfully, the Nollywood actress' 6-year marriage came to a sad end in 2014, with the actress revealing she actually sought for divorce from her former husband, Philip Ehiagwina.

She was faced with harsh critics, but she overcame them all and keep soaring in her career.

The actress later acquired a 2014 Mercedes G65 SUV reportedly worth N38m and moved into her multi-million naira house in Lagos. She was once known as the controversial Queen of Nollywood, but within the short space of time, the Rivers State born actress wiped off the controversy in her name and replaced it with her middle name-Charity.

Although she has not been very active in the movie world, the actress turned Philanthropist made it a point of duty to infect a lasting smile on the faces of thousand hungry and needy children all over Nigeria and beyond.

During the festive season, Tonto Dikeh, under the umbrella of her NGO, The Tonto Dikeh Foundation, blessed so many kids with lots of gifts and a memorable Yuletide.

She was also however rewarded by her mystery boyfriend she addressed as Mr.X. Those blessings came in the forms of gold accessories, designers wear and lots more.