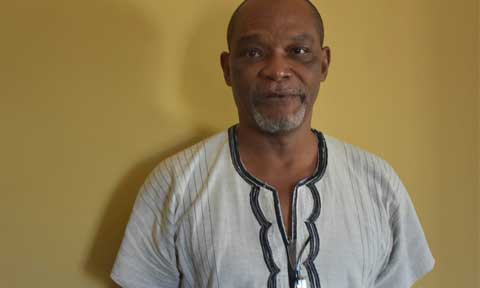 Many television viewers, especially those who followed rested soap opera, Checkmate, would readily recall his face as the randy lecturer, Professor Okon. But, whoever thought that was his first outing in a nationally aired television drama had obviously been mistaken, as he declares in this interview that acting on stage is where his fulfillment comes from. He also spoke on Nigeria as a failed state and referred to Nollywood as a bunch of amateurs.Excerpts:

How does it feel to be fifty?

It feels great, very great. You are not 50 so you wouldn’t understand. It is great having grown up in the right family, in the right place, seeing some good times in Nigeria as well as the bad times. And in worst times, I’m still moving ahead. I think is great to be alive and it’s great to be fifty.

What do you refer to as bad and good times?

Again, you wouldn’t understand. In this same Nigeria that is so bad now, we used to eat daily with N1.50 when we were in the university. And your 50k could give you half a chicken and rice. Was that not good ? Yea, then money had value and Nigeria was good. I’m talking about the 80s and then in the 70s I’m talking about having free meals in the primary school. Well, life was good. People graduate from the university and they buy cars because they give them loans. When you graduate from the university, a job was waiting for you… in fact while you are in your last year in the university employers of labour come to meet you to give you choices of where to work and even in the secondary school.

In my secondary school, Ministry of Employment officers came to us to say, “Ah! Before you go to the university you can work here and these are the benefits you will get and when you work you can apply and go in for service training, your salary will be paid, your school fees and everything would be paid. In this same country! Also in this country you could go to the Balogun with N100 and by the time you are leaving the Balogun, they will know that somebody came because the market will be nearly empty.Now, this is the country that people cannot eat with all their education.

Where did we go wrong? Who led us to where we are? Who put us in this trouble, where we are not certain of tomorrow? Can those good times be restored?

You should ask those people who enjoyed it and who are in power destroying it. Because they enjoyed it, Nigeria took care of them. But they got into power and they are turning their backs against Nigeria. If at 50 I tell you about all the good things I enjoyed, what about them that were before me? It means that it was even better but look at where they took us ... all of them.

Nigeria trained them in every part of the world but what are they giving Nigeria back… misery, poverty, illiteracy, doom and hopelessness.So you ask them what their days were like. Nigeria is not the only country in the world where there is economic recession and yet people still have hope in other countries.

Tell us about your family…

There are eight children in my father’s family and I grew up in love maybe because I’m the last. I met a sweet family set-up. I roamed and played but was disciplined at the same time knowing that I cannot go out of line. I was always brought back to remember that I’m from a family that has a name. It was sweet growing up in my family.We ate together, cried together, laughed together and played together.

I have five sisters. I never lacked anything with my sisters around . Sometimes they took so much care of me that they almost turned me into a girl. Those days, when we were going out they will make me very fine. It was nice growing up with my sisters. Yea, there were times they did things I never liked but I couldn’t shout at them because they were older but most times they did things that I liked. When we were not together I must always go and play my ball though sometimes they wouldn’t want me to go and play but I must be a boy.

Why don’t you act in movies?

It is because nobody gave me a role and I have not produced one myself.

You trained as a theatre artiste, do you think the present crop of actors are doing justice to Nollywood?

I have often said this: Nollywood is ninety percent amateur, so how can ninety percent be doing justice to movies? Ninety percent of Nollywood are amateur… they are kindergarten, they need to go and study because they are not doing anything whether justice or injustice. They are not there as far as Young is concerned. They could interest people but I would say it’s only ten percent which is the technical aspect of it that isn’t amateur. The artistic part is amateur.

What do you think can be done?

Ask them. I think they know what can be done. People just come out and give new definitions to things, a definition that is negative to the way I was taught acting. What I see today in the industry if compared to what I was taught are so far apart. Now, everybody thinks that what they see in Nollywood is what acting is but that needs to be corrected. It would take about fifty years to remove this mess they call acting from peoples psyche. There is nothing like acting in Nollywood …you only see people who talk .A robot can even do better because you can control it. Yes, some people said it in those days that instead of using actors they will use umber marionette. I think robots can do better because you will sit at a place and control the robot to do what you want it to.

Are you saying they should go back to school?

Since you don’t act much, how do you keep body and soul together?

Oh! That is one of the advantages of being a trained personnel in whatever you do. This my business; you don’t have to be in front of the camera all the time. You can be behind the camera and make your living.

So, what exactly is this business you are talking about?

Well, I teach. I do consultancy and I’m also into general entertainment where you wouldn’t have to see me.

Since your wife married you, she hasn’t been acting.

Why ? Hmm… She has not been out of movies, not since she married me. Maybe marital responsibilities are keeping her away from all acting but if you check, most of her own generations of actress are not there anymore maybe because producers and marketers don’t find them useful anymore. I don’t know.

When was the last time you acted on stage?

Why didn’t your relationship with Ronnie Dikko work out?

When are your movies hitting the market?

There is a plan towards that and I take things one at a time. I said earlier on in an interview many years back that when I retire from active acting, I will go into producing and teaching. I’m doing teaching now; so soon I will do producing and in that case, I wouldn’t be acting. But right now, I cannot tell you how soon to expect my movies.

Were you fed with silver spoon during childhood?

No! I was born into a humble family.

My father was a teacher and my mother was a nurse. Beautiful combination wouldn’t you say? My father was a nice guy, but I didn’t know him for too long before he died, when I was age ten. Then my mother (iron lady) was tough, she trained eight children alone after my father died in 1969.

Why did you marry an actress ?

She is a good woman…a beautiful woman. To me her profession doesn’t matter, I married for love not for any other thing.

What kind of challenges have you faced in this profession?

I was prepared for it and was trained for it. So, I don’t think I have faced any challenges except the challenge of Nollywood that has sidelined me and I don’t mind.

How did you find yourself in acting?

I loved acting from my childhood . My father was a teacher… he was a director when they were doing what they used to call concert in school those days. Then I used to go and watch some of the plays my sisters acted in and I loved it then. I just think it is a natural thing that I should read theatre.

How do you combine acting with the home front as a loving and caring father?

I don’t encounter any challenge . If I have to leave home for a number of days it is like I didn’t leave,because I’m always talking to my home. Because I believe that no matter how far we roam, no matter how far our thoughts may roam, our minds keep coming back to those we love at home. So wherever I am my mind is here.

Among the role you have played, which is the most challenging?

That should be my role in Checkmate, where I acted as Professor Okon. That role tasked my patience and not my ability due to the make-up.